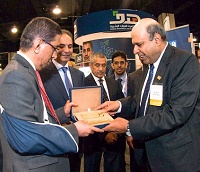 The King Saud University pavilion in the eighth edition of Job Fair USA has received the visit of a large number of graduates and has conducted some 150 personal interviews with them during the days of the fair, which was organized by the cultural attaché in conjunction with the graduation of the eighth class of King Abdullah Scholarship Program (KASP) which was held at the Gaylord National Resort & Convention Center in Washington Hotel during May 22 - 25, 2015.

More than 7000 graduates in various stages and scientific disciplines visited the Fair in the presence of the Deputy Chairman of the Saudi diplomatic mission in Washington Mr. Sami Al-Sadhan, the cultural attaché at the Saudi Embassy in the United States Dr. Mohammed Al-Eissa, and officials from the public and private sectors of the Kingdom.

During the opening ceremony, the university pavilion was visited by the Deputy Chairman of the Saudi Diplomatic Mission and the cultural attaché in Washington. 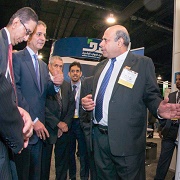 Dean of Faculty and Personnel Affairs at KSU Saad Al-Hussein, who is also Supervisor of Recruiting Outstanding Saudi Students Abroad (ROSSA) presented a detailed explanation of the main objective of the participation of the university in the Fair, which is to attract outstanding scholars in American universities.

Further, Dr. Al-Hussein also explained the procedure for attracting talented scholars from the Custodian of the Two Holy Mosques program through the development of an electronic system to process the applications to the talent attraction program in accordance with the applicable administrative system within KSU. He stressed the keenness of King Saud University to attract outstanding talent to its academic cadre, explaining that this followed the guidance and directives of KSU Rector Badran Al-Omar who stresses the need for KSU to participate in such important events. At the end of the visit, Dr. Al-Hussein presented the University Shield to Professor Al-Sadhan, and to Dr. Al-Eissa to celebrate their visit to the University pavilion. 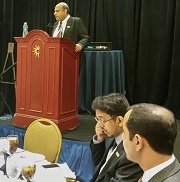 On the other hand, and also during Job Fair USA in Washington and for the third year in a row, KSU set up a special luncheon ceremony in the presence of heads of Saudi universities delegations and some government and private institutions as well as King Abdullah Scholarship Program (KASP). Dr. Saad Al-Hussein gave a brief speech about the participation of the university in the job fair, and the importance of this participation as an investment to get the best national graduates.

Following that, Dr. Khaleel Alyahya, director of the program to attract distinguished students abroad, gave a visual presentation on the program with information about the program and its objectives, principles and conditions during the application to join it. Then two of the scholars abroad talked about their experience with the program.