King Saud University researchers participated last month, presenting seven research papers in the Conference on Knowledge Based Industries and Nanotechnology in Doha under the patronage of Sheikh Hamad bin Khalifa Al-Thani, Prince of Qatar. "Toward a developed Arab economy based on knowledge industries." The participation consisted in seven papers on different areas of Nanotechnology. 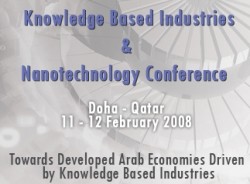 The objective of the Conference was to get acquainted with Nanotechnology through research and Nano-technological applications in Arab countries to benefit from human and material competitive potentials, and exploit them to promote the Arab society to a better state, benefiting from the experience of newly industrialized countries, which succeeded in building a developed technological base that enabled them to realize high growth rates that helped them to solve many of the economic and social problems.

It is worth noting that Nanotechnology augurs well of a big industrial revolution whose applications are expected to pervade all walks of life and most economic activities.

The participation of the University at the Conference consisted of the following delegation:

His Excellency Professor Al-Ghamdi gave a main lecture the first day of the Conference on the University's scientific developmental programs about more than sixteen programs within the University such as King Abdullah for Nanotechnology Program, pointing out to the foundation of King Abdullah Institute for Nanotechnology, Research Chairs Program, Riyadh Techno-Valley, Nobel Laureates Program, Research Excellence Centers Program, and other programs launched recently by the University to realize international leadership. The delegation also participated in the accompanying exhibition, and showed and distributed publications acquainting the audience with the University's various programs.

To realize maximum benefit from participating in this Conference, a model has been drawn to document all information related to the participants at the Conference from all over the world, and to add them to the database of the University to benefit from them. To do this, the model has been handed out to the audience, and information about not less than fifty participants has been collected at the Conference. Some, who interested to collaborate with the University in scientific research and international cooperation, contacted the delegation. At the end of the Conference, His Excellency Dr. Abdullah Alnajjar, director of the Arab Acedemy for Science and Technology, expressed his thanks and respect to KSU for its efforts, its effective participation, and its strong presence at the Conference. On the other hand, the organizing committee offered Professor Al-Ghamdi a commemorative present to express their respect to the presence and effective participation of the University.

It is worth mentioning that the papers that the University offered at this Conference are the following: