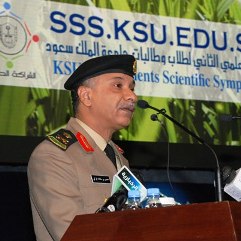 In addition to the many scientific presentations and student activities, the  Second Students Scientific Symposium held last December included an important address by Major General Mansour Al-Turki, who spoke on behalf of the Saudi Arabian Ministry of Interior.

Aimed at promoting student leadership at King Saud University, General Al-Turki’s speech, entitled “The Deviant Group – Means and Methods of Delusion and Recruiting.” The high-ranking officer's  presentation was underscored by a description of how societies have suffered due to Muslim youth’s misconceptions of the meaning of jihad. He said these misconceptions have been exploited by extremist groups in achieving their goals and serving their own personal interests, using Muslim youth as a means to an end. These practices, he stressed, are sadly creating a negative and extremely distorted impression of Islam throughout the world community.

“In light of this”, he said, “We must analyze the relationship between extremist ideology and terrorism.” “One might argue,” he said, “That extremist ideology produces the motivation to carry out a terrorist act, which in turn produces more extremist thinking to justify its existence to itself and to others."

The officer said that Saudi studies have left no doubt as to the utmost importance of making immediate efforts to stem the growth of terrorism and extremism. “We have been conducting such a study over the past few years,” he said, “And we have reached some conclusions.”

A second conclusion is that religious fanaticism, which some mistake for devotion, leads to intolerance and an outlook in life devoid of logic and compassion. Here, the general pointed out that a suicide act which leads to the death of innocent children, women, mothers and men, is absolutely alien to Islam and gives world opinion a bad impression of Islam and Muslim youth.”

A third conclusion, according to the General, is that “Families and educators must teach our sons and daughters the true concept of Jihad in Islam. Our God-serving religion forbids killing. If one slays a person, it is as if he slays the whole of a people”. He added, “We must not leave an open door for those who exploit our youth’s zeal to help Muslim countries like Afghanistan, Iraq and others, and deceive them into believing false meanings of Jihad”. He urged the audience to preach moderation in religious commitment among the youth. The Prophet, PBUH, had directed us to do so.

“As I stand today in the nation’s university, King Saud University, and as I see your bright young faces, full of enthusiasm and hope, I feel extremely happy," he said. "Yet, I also feel a responsibility to keep you from tossing away your future and the future of our beloved Kingdom, and from submitting to those who want to usurp your talents and free spirit.

"They want to mutilate the message of our unique and beloved religion, the religion of pride, tolerance, compassion and intelligence.”

Quoting from Holy Quran’s Surat Al-'Isra' [17:33], the General concluded, “Do not kill any soul whose killing has been forbidden by Allah except by right and if one is killed unjustly. We have granted the right of retribution to his guardian”.