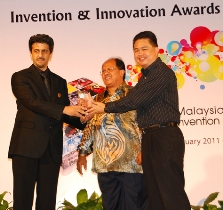 KSU participants earned marked distinction at the event against a wide array of international talent present. Evaluated by a high-ranking and expert committee, this latest success in an international arena illustrates the formidable international competitiveness and skills of KSU’s researchers and leaders.

At the Invention and Innovation Awards ceremony, the Malaysian Association of Research Scientists (MARS) and the Professional Trade Exhibition and Meeting Planners (PROTEMP) to encourage, recognize and promote scientists and researchers of excellence in innovation.

KSU’s booth in the exhibition was named the best booth display, designed by a team from KSU’s Innovation Center and eloquently representing traditional Saudi hospitality and warmth.

KSU also received a number of other medals, with six gold medals going to:

Much of the interest in the competition was due to the efforts of the Innovation Center, which actively encouraged members of the University community to enter the competition. Many competitive faculty and student projects were submitted to the Website, and the most promising projects were chosen to compete internationally according to defined criteria. Many of these projects, it should be noted, were presented in international competition for the first time.

The Malaysia Invention and Innovation Awards committee annually recognizes exemplary and outstanding inventions and innovations within a multitude of technology industries, and is committed to the promotion and commercialization of science and technology.

The event was held at the Kuala Lumpur Convention Centre on February 17-19.