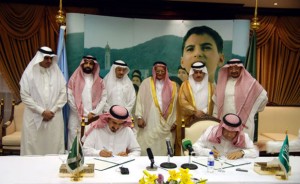 King Saud University’s National Commercial Bank Research Chair for Partnership in Responsibility was launched in June 2008, with the purpose of becoming a leader in social responsibility throughout the Arab world.

The Chair’ program was powered by the concept of spreading awareness involving corporate social responsibility and by raising the culture that encourages corporations to be socially responsible – assisting them by introducing methods designed to maintain respect for ethics, society and the environment.

The signatories were KSU Rector Dr. Abdullah Al-Othman and Mr. Abdullah Salem Bahamdan, chairman of the Board of Directors of the National Commercial Bank (Alahli). The attendees also included board members Sheikh Al-Amoudi, Sheikh Buqshan and Mr. Abdul-Aziz Ibrahim Al-Omar as well as Engineer Mahmoud Al-Turkistani, chief of the bank’s Community Service Unit; Abdulmohsen Al-Harthi, director of the National Bank’s Education Programs; and Omar Al Th’beeti, in charge of the bank’s Central Region.

The Chair is situated in KSU’s College of Business Administration (CBA), which also houses the Abdulrahman Alrajhi Chair for Charity Work and the Saleh Kamel Center for Islamic Banking.

At the outset, the Chair set six major objectives. They included:

1. Bolstering KSU’s role in the domain of social responsibility.

2. Assuming developmental studies in social responsibility and serving society and the interests of the university and the bank.

3. Contributing to the elevation of the Kingdom’s stature -- distinguished for its innovation, creativity, research and development in support of a knowledge-based economy -- and enhancing KSU’s role in the achievement of sustainable human development.

4. Bolstering the partnership between KSU and society and advancing the optimal investment of human resources in KSU, utilizing  experts in all fields of knowledge, as well as optimizing the use of facilities, equipment and research resources of KSU and members of the community.

5. Attracting the best local and international researchers in various specialties, optimizing the use of their talent in a program to rehabilitate and train various national workforces and encouraging students to invest their knowledge

6. Employing studies and research and supporting scientific publishing, particularly in high-profile international journals, as well as participating in national and international research production, increasing familiarity with modern technology and establishing a support basis for national development programs in social responsibility.

The Chair has established agreements and commitments. Memos were signed with the Social Responsibility Council and the Saudi Management Association in 2010, agreeing to conduct workshops and present lectures.

The Chair’s work has also included scientific visits in 2010. Officials made three major visits, the first one in March to the Saudi Telecom Company with whom the Chair exchanged expertise and jointly sponsored seminars. The following April, Chair officials met with the Social Responsibility Council, providing training, exchanging expertise and holding seminars and workshops. Finally, in May, the Chair visited the Almarai Company for an exchange in expertise and joint sponsorship of seminars.

The agenda also featured a June workshop titled “Social Responsibility and the International Concept and Standards as per Specifications.”

In 2010, the Chair was highly visible on the lecture circuit, beginning with Dr. Askar Al-Harithi’s presentation in the KSU College of Business Administration. Dr. Al-Harithi’s message dealt with the need to inculcate Saudi youth

His also addressed the need to establish social responsibility in the Kingdom and how to proceed. Discussions after the lecture revolved around planting the basic concepts in the private and public sectors.

Dr. Mazen Rasheed lectured at the Al-Sharqia Chamber of Commerce and Industry, discussing the need for an ideal working environment and suggested how this can be best used, citing the experience of the Saudi Capital Market Authority.

The Chair’s media coverage in 2010 included a television interview on environmental work and a press article was published on social responsibility – the latter was placed on the web.