Dr. Khalid Al-Saleh, Director of KSU’s Intellectual Property and Technology Licensing (IPTL) program, has announced that KSU has received a Design Patent (U.S. D667414) from the U.S. Patent Office for an Ergonomic Arabic Keyboard, invented by Dr. Mohamed Zaki Ramadan Osman, a faculty member in the Department of Industrial Engineering in the College of Engineering. 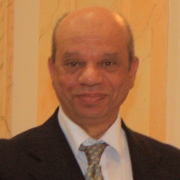 The new keyboard was designed to reduce strain and avoid long-term musculoskeletal injuries to the forearm, wrist, and hand. The design was based on the actual frequency of use of Arabic characters. The final keyboard design selected for the patent application placed the most-frequently used characters in the center of the keyboard, within easy use of the forefinger or the middle finger. In addition, keys for the most-used characters were made wider for additional efficiency. High-frequency digraphs, or letter pairs, were also kept in close proximity. Experimental trials were conducted to compare the design to the traditional Arabic computer keyboard. The new keyboard design produced a twelve percent improvement in typing efficiency in addition to the expected long-term ergonomic improvements.

Dr. Osman attributed the gain in quality to the use of an ergonomic algorithm to optimize the keyboard layout. “This gain in quality might be explained by pointing out that previous research primarily focused on typing speed or on easy memorization of the arrangement,” he wrote in an e-mail interview.

Today’s computer keyboard designs trace their origins to the 1870s, when the typewriter was invented in the United States. The current “QWERTY” configuration – named for the first six keys, left to right, on the top row of letter keys – has been largely unchanged since then. The layout of the keys is acknowledged to be inefficient, but millions of people have been trained on the system and, without a more significant payback demonstrated by alternative designs, there has been no appetite to force a change. The advent of computers in the 1970s and 1980s led to the addition of systems and function keys, and applications and cursor control keys, but the basic QWERTY layout of the letter keys has stayed the same.

The Arabic computer keyboard has a similar history, and is tied to original typewriter designs. The Arab Standardization and Metrology Organization (ASMO) developed an Arab keyboard standard layout in 1987, but it was not adopted by the computer industry and was eclipsed by market forces, especially after Microsoft adopted a slightly different keyboard for its Arabic-specific products.

Dr. Osman’s Ergonomic Arabic Keyboard Design Program was a three-phase process. The first step was to determine a frequency analysis of Arabic characters -- for digraphs as well as monographs. This was performed by gathering texts from leading Arabic e-books that are available on Web sites. A total of fifty-four e-books were collected, consisting of 7,262,260 characters.

In the second phase, an ergonomic algorithm was mathematically defined to optimize the keyboard layout – based on keeping typing time to a minimum value -- according to the frequencies found in the statistical model developed in phase one.

Experimental work was conducted in phase three to verify the optimal keyboard models identified in phase two. A total of twenty-one paid native Arabic speakers were selected to participate. They were all right-handed, male students at King Saud University, and had no histories of hand and forearm musculoskeletal problems in the year prior to the experiment. The participants self-rated their levels of typing skill as “novice.” That is, they typed with one finger and needed to look at the keyboard. The experimental design had seven students randomly assigned to each of three types of keyboards, identified as traditional, experimental keyboard A, and experimental keyboard B. The dependent variables were muscle activity, typing performance (speed and accuracy), and subjective ratings.

The experimental tests confirmed the benefits of the new keyboard design, while also demonstrating that the ergonomic algorithm is effective in finding very good solutions.