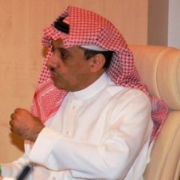 An exhibition titled “Life is an Idea” was held in 2012 in the Olaysha Center for Girls, a three-day event under the patronage of Rector Badran Al-Omar.

The exhibition was conducted to display many of the innovations and inventions created by female students during the year.

In cooperation with the assistant vice rectorate for Graduate Studies and Scientific Research, Al Jazirah Ford Vehicles Agency, Twakilat, sponsored the exhibition and presented a car to the individual for the “Best  Invention or Innovation.” Jarir Bookstore also offered a tablet computer to competition winners among both exhibition participants and visitors.

Officials found that all the displays demonstrated masterful creativity and technical intelligence. The winner had to be chosen in a drawing. 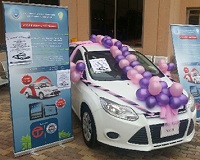 The vice rectorate for Graduate Studies and Scientific Research for developmental programs held a ceremony to allot the prize, a Ford Fox car.

The ceremony was held in the Olaysha Center for Girls under the patronage of the Vice Dean for Female Student Affairs, Dr. Fatimah Jamjoom;  the dean of the Olaysha Center, Dr. Benayeh M.S. Al Rasheed; and the assistant vice rector for Graduate Studies and Scientific Research, Dr. Ebtesam Al-Olayan; and the representative of  the Tawkilat Al-Jazirah company, Maram Al-Harraz.

The ceremony began with an address by Dr. Jamjoom who described the outcome of the research carried out by female students in all departments and colleges and he highlighted the fact that their achievements are the result of the support that the KSU leadership has haccorded to scientific research and the potential that has offered to make the KSU environment a melting pot of creativity.

“We all know,” she said, “the role of universities in social development. We know this role does not end with the teaching process, but extends to a national leadership role. Development comes from establishing an environment that spurs talent and potential. Our female students are talented and all what they need is a catalytic environment. “

Dr. Jamjoom added that this is exactly the vision that KSU and its leadership strongly maintain.

Dr. Benayeh M.S. Al Rasheed  thanked  Dr. Jamjoom for her presence and she also extended her appreciated to Dr. Al-Olayan for organizing the ceremony. She expressed her pride in the students’, saying she hoped that the support for students will be increased as part of social responsibility, with more sponsorship of distinguished students. She thanked Tawkilat for sponsoring students and expressed her desire that all students will succeed.

Dr. Al-Olayan thanked Rector Badran Al-Omar and Vice Rector Ahmad Al-Aameri and lauded the generous support of Dr, Jamjoom,  Dr. Al-Rasheed , as well as the sponsors Tawkilat and Jarir bookshop.  She also lauded the role played by KSU in its permanent effort to inspire the students’ creativity and distinction.

She said creativity is an idea that grows and evolves into a marketable and profitable product thanks to the fertile soil of the university which has already produced many creative students. She said that in addition to the environment, KSU used all its material and moral support and guidance from the minute an idea was proposed until it materialized as a successful product. She said this is the standing policy of KSU as the Rector pointed out during his meeting with faculty and staffers yesterday.

After that Dr. Jamjoom drew a ticket with a name of an inventor and her invention.  The prize was won by Fawziyya Maiman for her invention Luncheon Microscope, and she received her keys of the Ford car amid raving enthusiasm by audience and students and all-out encouragement. The winner expressed her joy with the prize and thanked the University’s Innovation Center and the Vice Rectorate for Graduate Studies and Scientific Research – Developmental Programs –Dr. Olayan, the scientific committee and officials of the competition.

The ceremony ended with the distribution of commemorative shields for sponsors of “Life is an idea”  Jarir books and sponsors of the competition Tawkilat Ford.