King Saud University's vice rector and an ITC consultant with the UNDP’s projects at the Saudi Ministry of Foreign Affairs received a US patent on July 2 for their novel and low-cost method of determining visibility levels in dust and sandstorms.

KSU Vice Rector Abdulaziz Salem Al-Ruwais and the MOFA’s Abobakr Sultan Ahmed, a former KSU scientist researcher, developed the system, which uses a near infrared transmitter and receiver to measure horizontal visibility during dust and sandstorms.

The inventors say the system can be used to enhance military efficiency, protect infrastructure, and increase air traffic safety.

It could easily be integrated with existing road traffic control systems, or mobile communication networks to increase safety and provide the public with better services.

The system automatically calculates levels of visibility based on the near infrared system and the ambient wet conditions of a sand or dust cloud.

It can measure horizontal visibility in such storms from very low levels, up to ten kilometres.

A number of transmitters and receivers can be positioned at varying angles to provide more coverage and enhanced accuracy. 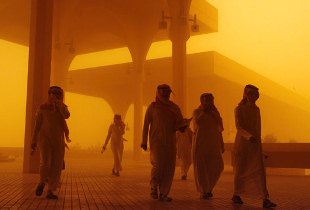 The near infrared system can be easily manufactured using off the shelf electronic components, and is easy to operate and does not require any specialised skills.

Dust and sand storms occur regularly around the globe, and total amount of particles in the earth’s troposphere from such storms is estimated to range from 100 million to 550 million tons per year.

Sever dust and sand storms occur frequently in the Arabian Peninsula and other areas of the Middle East and North Africa.