King Saud University's Social and Cultural Committee has celebrated its closing ceremony at the University's College of Science, commemorating and celebrating the Committee's activities over the past academic year.

The dean of the College, Abdulrahman I. Almansour, played a central role as chief patron of the event, with the vice dean of graduate studies and faculty members of the ceremony also in attendance. 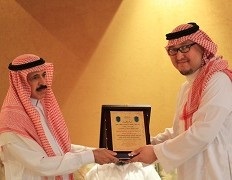 During his speech, dean Mansour praised the efforts of the members of the committee.

In addition, several students expressed their views on participating in extracurricular activities.

During his speech, Sattam Almadani, Assistant Professor at Geology and Geophysics Department, thanked the dean and vice dean of the College for their efforts and support to make the ceremony a success.

At the end of ceremony, 100 copies of the monthly newsletter were also distributed.