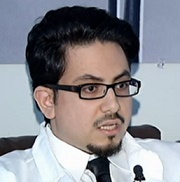 Dr. Abdullziz Al-Mehlisi works at the George Washington University Hospital, on April 16, 2015 early morning, he finished work and was driving home over the key bridge.

Dr. Al-Mehlisi noticed an accident with the driver thrown on the other side of Arlington key bridge, luckily one of the first people to arrive at the crash scene happened to be a 2nd Year Emergency Resident.

Dr. Al-Mehlisi leaned over to check the man pulse only to find out he was already unconscious and he started to lose his pulse, that when Dr. Abullaziz started to give him CPR, until Arlington Fire Rescue has arrived at the crash scene and continued the resuscitation.

The police applaud to Dr. Abdulziz and stated that thanks to his effort the man's life has been rescued. Dr. Abdulziz hope the man recovers from his injuries, and said that he felt appreciated to help someone's life, and that he only did his job.

This news has been published in local newspaer of ARLINGTON on April 17, 2015.