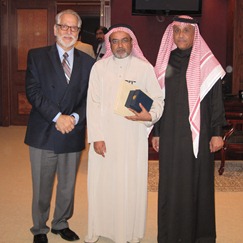 King Saud University’s Biomarkers Research Program, formerly known as the Diabetes and Endocrinology Research Laboratory, has come a long way since its inception in 1987. What began as a modest biochemistry laboratory has been transformed into a world-class research center led by founder Professor Omar Salem Al-Attas, presently the Director of the Center of Excellence in Biotechnology Research (CEBR) and Attracting Unit for Distinguished University Staff (AUDUS).

Under Dr. Al-Attas’ guidance and complemented by the expertise of Dr. Nasser Al-Daghri, Dr. Majed Saleh Alokail, and Dr. Khalid M. Alkharfy, the Biomarkers Research Program (BRP) has become the breeding ground of KSU’s top biochemistry post-graduate students in the Kingdom’s official laboratory for major epidemiologic surveys, a laboratory that has published more than 200 papers in international peer-reviewed journals and participated in more than 50 international scientific conferences. 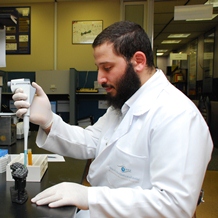 But that's not all. The BRP team and students were hosts to the 4th International Conference of Biomarkers in Chronic Diseases (ICBCD), held in May of 2010. The conference was organized by BRP and King Saud University’s Vice Rectorate for Knowledge Exchange and Technology Transfer (KETT) in collaboration with the Giovanni Lorenzini Medical Science Foundation, Milan, Italy. Since then, BRP has organized several lectures, symposiums and workshops featuring world-class scientists, most of whom were accredited by the local Continuing Medical Education (CME).

BRP began its humble roots as an academic laboratory, but participation in a national study on diabetes mellitus from 1990-1994 led to a focus on biomarkers to improve health care and promote healthier life styles through prevention and early detection of the most common chronic non-communicable diseases in the Kingdom. A “biomarker” is a biological or clinical indicator that can be measured to signify the presence or likelihood of a particular disease. In the past, unsophisticated biomarkers like blood pressure (hypertension) and glucose levels (diabetes mellitus) were commonly used. The medical world has a much understanding of chronic diseases because modern research has developed methods to detect specific proteins, cells, molecules, genes, enzymes, hormones and other organisms found in blood samples.

It was difficult to get the public's attention to biomarkers in 1992, but with BRP’s national and international reputation, collaboration with a variety of Saudi universities and ministries, and aggressive public outreach programs,  "biomarkers" has become a common term that has made a significant impact on Saudi society’s awareness of the causes and treatment of chronic diseases. 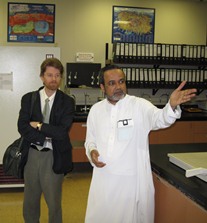 Some of BRP's scientific publications have gained scientific and media attention both locally and internationally. The study on the biomarkers of breast cancer was featured in "The Doctor's Channel" of Reuters Health and in MBC1 in 2009 and the significant vitamin D deficiency found in most Saudis was featured in local newspapers in 2010. Recently, the parent-offspring transmission of metabolic traits was featured in "Elites TV", a New York-based entertainment website and "BioSpace", a California-based industry news website for professional scientists.

BRP currently has 12 research projects, involving a wide range of subjects including obesity, cancer, diabetes, cardiovascular diseases, liver disease, diet, and air pollution. The program was funded with SR12 million in 2010 from the King Abdulaziz City for Science and Technology (KACST) via the National Strategic Plan and KSU.

The BRP's milestone achievements, however, would not have been possible without its stronghold of highly efficient and hard-working research staff. Furthermore, owing to its impressive list of laurels and its potential to expand, BRP, together with the gracious approval of KSU Rector Abdullah Al-Othman, has easily attracted  and signed collaborations with five international experts to serve as BRP advisers. These international partners belong to a plethora of roster of distinguished researchers by ISI Thomson Reuters:

Prof. Roger S. Williams, the man behind the first successful liver transplant in the world, is the Director and Professor of Hepatology (liver, gallbladder, biliary-tree and pancreas studies) at University College London, Institute of Hepatology.

Prof. George P. Chrousos, internationally pre-eminent in the field of pediatrics and endocrinology, is Chairman of the First Department of Pediatrics at the University of Athens’ School of Medicine, Athens, Greece.

Prof. Axel Ullrich, 2010 recipient of the Wolf-Prize in Medicine and 2003 King Faisal Award for Medicine, is in the world’s top-10 H-index (indicator of impact of published work through citations) of living biologists and the director of the Molecular Biology Department in Max Planck Institute, Germany.

Prof. Mario S. Clerici, internationally-acclaimed in immunology, is the department director at the University of Milan of the Department of Biomedical Science.

Prof. Jacques Dumont, an award-winning expert in thyroid endocrinology, is the founding director of at the Institute of Disciplinary Research (IRIBHM), University of Brussels.

While BRP has come a long way and accomplished so much, the KSU facility shows no signs of looking back, rather it maintains its steadfast commitment to the future. Its history is truly an inspiration, its present and future a vanguard of KSU’s thrust in world-wide scientific prominence. 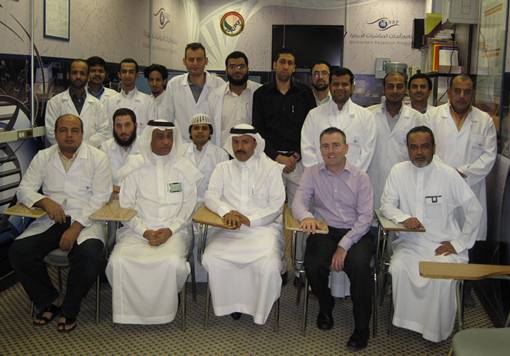