King Abdulaziz University Hospital in Riyadh recently hosted a meeting for hearing disability experts from throughout the Arab world, along with representatives of the World Health Organization (WHO).

The King Saud University event featured a distinguished cast of rehabilitation specialists, acoustics researchers, primary care physicians and educational workers for the hearing-impaired, who presented their unique perspectives in the field of hearing disability and outlined the progress being made in their respective nations.

KSU was chosen for its rising prominence in the field of Otolaryngology (i.e. the diagnosis and treatment of ear, nose, throat, head and neck disorders), thanks in large part to the leadership of specialists such as Abdulrahman Hagr, Abdulrahman Al Sanosi, Khalid Al-Malki and Murad Almomani.

During the meeting, the experts discussed their various efforts in addressing hearing disabilities, which are guided by WHO objectives such as:

Dr. Hagr, supervisor of the University's Prince Sultan Research Chair of Hearing Disabilities and Implantable Devices (RCHD), said that KSU is an international leader in the fight against hearing disabilities, running the largest cochlear implant program in the Middle East. The program, he said, ranks eleventh among all such programs in the world, and is experienced with all types of hearing disability implants such as cochlear devices, BAHA (Bone-Anchored Hearing Aids), vibration hearing aids, hybrid hearing aids, and auditory brain stem implants.

Dr. Hagr also said that that KSU has founded the region’s Otology-Neurotology Fellowship program, the first of its kind in the Middle East. The two-year program provides fellows with structured clinical opportunities needed to develop advanced skills in the diagnosis and treatment of neurological disorders of the ear.

“With these facts in mind,” Dr. Hagr said, “it was decided to establish the King Abdullah Ear Specialist Center, the region's first center of its kind in the field of hearing disability and transplantation of hearing devices”. He said this center will become a reference for all citizens and will become a teaching and research center matching the cream of such centers abroad, as repeatedly asserted by KSU rector Abdullah Al-Othman and Vice-Rector for Health Specializations Dr.Mohammad Al Shehri.

Dr. Hagr's presentation, Advancement of Hearing Care, was an overview of hearing disabilities in Saudi Arabia and the Kingdom's progress in addressing the problem. He said that awareness is key, noting that if people are aware of the societal and personal implications of hearing disabilities, prevention and care will subsequently improve. 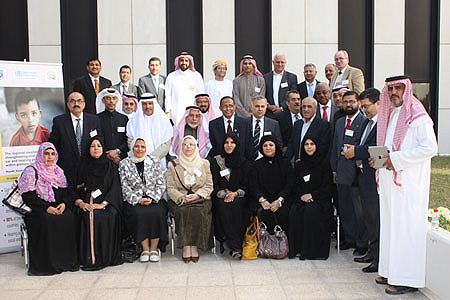