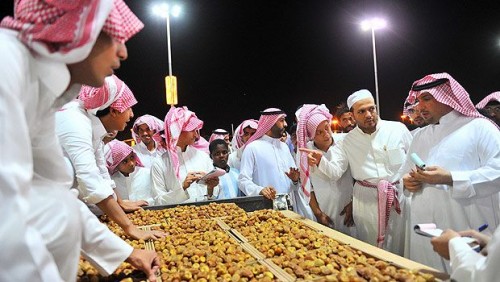 Among their many important research projects and ambitious plans, the King Saud University's Date Processing and Industry Chair and Michigan State Universiy represenatives have discussed cooperation for plan in which date palm capsules are to be used for medical purposes, as well as basic additive vitamins.

The importance of the meeting was explained by Dr. Abdullah M. Alhamdan, supervisor of KSU’s Chair of Dates Industry and Technology and a date palm specialist.

“The cooperation began here and involved experts in all medical and non-medical disciplines to make the best use of date palms in all domains,” Dr. Alhamdan said. “We are currently working on using date palm residue and we have a rich experience in this domain. There are two related research projects that will be undertaken in the coming months.”

Dr. Alhamdan explained that Saudi Arabia has a rich pool of studies and research of date palms and it is imperative that the date fruit, so abundant and vital to the Arab World, should be utilized. One needs to look no further than the Buraidah Date Festival to understand the date’s importance in the country.

The 2012 festival, launched in September, is scheduled to last more than a month. In a little more than a week, approximately 300,000 tons of dates were sold and the event ultimately reaped millions of Saudi riyals. The 2011 festival earned more than 800 million SAR, with the festival attracting legions of farmers and traders, as well as agriculture and marketing experts focusing on the palm tree industry.

The event’s activities included many interesting competitions such as climbing palm trees, a photo competition focusing on the date season, and the best newspaper and television reports. Early in the event, the Palm Center was inaugurated and the Prince Faisal bin Bandar Palm Tree Award was named after the Qassim Province’s governor. 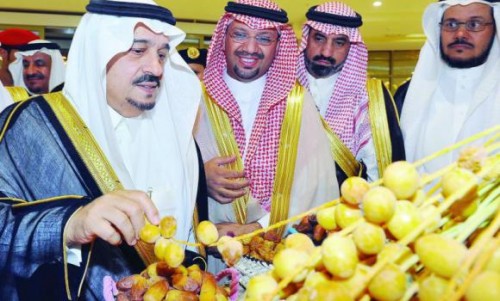 HRH Prince Faisal bin Bandar, who inaugurated the world largest date festival, as well as the city’s Date Palm Center, thanked the government for its support of date farmers and the province’s companies. He iexpressed his delight regarding the progress of the festival and its impact on the marketing of dates, not only in the Kingdom but throughout the world.

The Prince said Saudi dates are delivered throughout the world and proudly noted that thousands of tons are given away as assistance to developing nations and countries facing acute crises. “Every Saudi takes joy and pride that the fruits of his land reach every person on this planet,” he said.

The Prince thanked all the festival workers and said many have spent the last 21 years working to make it the success that it has become. “Any colleague, whatever his affiliation, receives credit for this accomplishment,” the Prince proclaimed. “This is a team achievement and the epitome of cooperation between the private and public sectors”.

About the Palm Tree Award carrying his name, the Prince said he hoped the honor will become a milestone in the area. “The palm tree is the symbol of our beloved Kingdom,” he concluded. “We will never cease to nurture it because it [brings] wealth to our people”.

Saudi Arabia is the second largest producer of dates in the world and dates are the Kingdom’s most important agricultural product and have received more attention than any other fruit in Islam. King Saud University established the Date Processing and Industry Chair in 2011.

The date received special status when Prophet Mohammed (PBUH) encouraged Muslims to break their fast at sunset during the month of Ramadan by consuming dates and water. He once said that any person with dates in his house is not poor.

Sukkari is the most popular variety of dates being sold in the market, accounting for 80 percent of total sales, but there are more than 300 types of dates in Saudi Arabia, and these include Hashishi, Aseela, Rothana and Al-Khalas.