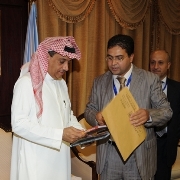 Accompanying the delegation was Dr. Ali Alkarni, Chairman of the Board of Directors for SAMC, an Associate Professor in the Mass Communications Department in the College of Arts, and Editor-in-Chief of the KSU newspaper, Risalat Al-Jamiah; and Khalid bin Hamd Al Malik, Editor-in-Chief of the Saudi newspaper Al Jazirah.  They, along with several other members of the Association, visited the College of Arts and the Risalat Al-Jamiah offices.

The Saudi Association for Media and Communication is a non-profit association of journalism and mass communication educators, students, and media professionals.  Honorary President of the organization is Prince Naif bin Abdulaziz Al-Saud.

The vision of SAMC is to be the pioneering academic association in media and communication nationally and in the pan-Arab world.  Its mission is to draft elaborate scientific researching plans, establish customized programs, conduct training sessions, offer academic consultation, and cement cooperation with media organizations to develop professional media practices.