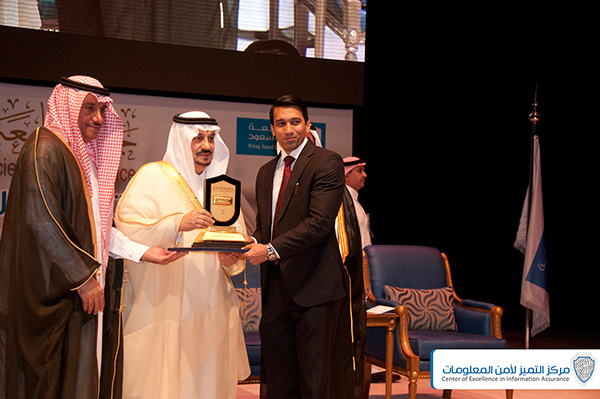 Center of Excellence in Information Assurance (CoEIA) at King Saud University is pleased to share a great news that Prof. Muhammad Khurram Khan has been conferred upon ‘King Saud University’s Award for Scientific Excellence 2016’. Prof. Khurram got First Position in ‘Inventions, Innovations, and Technology Licensing Prize’, which is awarded to the outstanding researcher whose work is mentioned under scientific and health inventions and innovations, patents, licensed technology and has a value-added scientific worth in KSA as well as internationally.

The award distribution ceremony was held on Monday, 16 May 2016 at King Saud University under the patronage of HRH Prince Faisal Bin Bandar Bin Abdulaziz Al-Saud, the Governor of Riyadh province. The ceremony was attended by a large number of attendees, including KSU administration and leadership, faculty members, researchers, students, staff and dignitaries.

“It is indeed a great honour for me to win the top award of King Saud University and I offer my sincerest gratitude to Almighty Allah who enabled me to win this prestigious prize. The credit of this award goes to my parents whose prayers always lead me to successes, and the facilities and services provided by King Saud University and its leadership”, stated Prof. Muhammad Khurram Khan with cheer and happiness on his smiley face!

Prof. Muhammad Khurram Khan has been instrumental in research and innovation and has published over 250 research papers in well-reputed international journals and conferences. In addition, he is an inventor of several US/PCT patents and his inventions have won awards in International innovation exhibitions in Switzerland and Malaysia. He is the Editor-in-Chief of a distinguished International journal ‘Telecommunication Systems’ published by Springer-Verlag for last 23 years with its recent ISI impact factor of 1.163. Furthermore, he is also the full-time editor of 10 ISI-indexed international journals published by IEEE, IET, Elsevier, Springer, and Wiley, etc.

Due to his outstanding contributions and achievements in scientific research and innovation, some prestigious international and professional societies e.g. Institution of Engineering and Technology (UK), British Computer Society (UK), and Future Technology Research Association International (Korea) have bestowed him with the elite ‘Fellow’ title. He has recently won the 'Best Paper Award' from ISI-indexed Q1 journal the 'Journal of Network and Computer Applications' (Elsevier), which was awarded at flagship conference IEEE Globecom'15, San Diego, USA, Dec. 2015.

It is to note that last year, Prof. Khurram has also won ‘King Saud University’s Award for Scientific Excellence 2015’ in the category of ‘Research Productivity in Science & Engineering’.