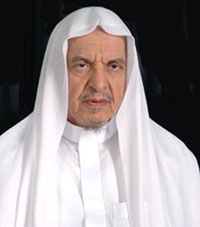 The head of the King Abdulaziz Center for National Dialogue, Sheikh Saleh Al-Hussein, signed a memorandum of agreement yesterday with Rector, Abdullah Al-Othman, at King Saud University. The agreement aims to promote the culture of dialogue and spread its concepts among students at the University, as well as fostering intellectual and cultural consciousness, a concept embedded in the Islamic faith and Saudi national values. Such efforts will promote principles of tolerance, communication and moderation for which this culture stands.

Dr. Al-Othman welcomed Sheikh Saleh and his companions, and confirmed that KSU is proud to be one of the founding partners and consultative pioneers of the Center, and that it is equally proud of the membership of some of the Center's staff. He expressed his enthusiasm about the agreement, and said it stems from the two institutions' long-standing friendly relations.

Sheikh Al-Hussein confirmed that the agreement expresses a genuine trend of national convergence enhanced through the culture of dialogue, and pointed out that in seeking to create such a culture and mindset, real possibilities and obstacles must be taken into consideration, either actively or passively. He stressed that religious, cultural and societal needs must be considered as well. He also noted that the agreement with an institution as prestigious as King Saud University is indicative of the significance of the cultural rapport existing between the various sectors of Saudi society.

The Center's Secretary General, Mr. Faisal Bin Muammar, confirmed that signing the agreement is consistent with the national goals laid out by Saudi Arabian King Abdullah, which include the dissemination dialogue across society, and to broaden the scope of such partnerships to involve key national institutions, so that the dialogue can reach every home, school, and mosque.  He noted that it also involves cooperative endeavors among the various national institutions both to propagate the culture of dialogue and to expand the scope of partnership to include the citizens.

Speaking of the Agreement objectives bin Moammar confirmed that the memorandum is mainly aimed at:

Cooperation between the two parties shall be conducted in the form of cultural and intellectual programs in various levels and fields of education. A team of specialists from both sides shall be chosen to carry out the following tasks:

His Excellency praised King Saud University for its role in the social sciences, commending the methodical and scientific visions presented in its research and publications, as well as fostering intellectual consciousness in line with national principles.  Prof. Ali Al-Ghamdi, the Vice-Rector for Graduate Studies and Research, referred to the University’s ambitions to make more research at the post-graduate level increasingly socially-engaged in order to help define and analyze certain social issues, as well as working cooperatively towards social reform and nurturing the spirit of dialogue across society.