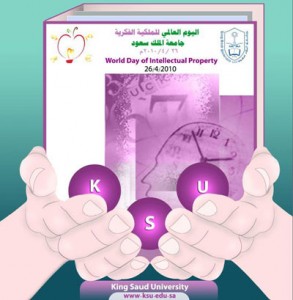 The workshop was developed to encourage talented and creative students of all levels.

Dr. Francis Gurry, Director General of the World Intellectual Property Organization, addressed the workshop on global connectivity, how rapidly it has expanded and how the worldwide communication network will impact our future.

He noted that accelerating pace of innovation and speed of data management and exchange will benefit all – from corporate entities to research institutions to individuals.

The workshop included a roundtable discussion by participants from King Saud University’s women’s department and science and technology, law and business administration programs. They proposed cooperation between the intellectual property program and Ministry of Education to promote invention and innovations by students of all ages.

The World Intellectual Property Organization, headquartered in Geneva, Switzerland, was established in 1967 as a specialized agency of the United Nations. Its mission is to develop “a balanced and accessible international intellectual property system, which rewards creativity, stimulates innovation and contributes to economic development while safeguarding the public interest.”

For the past 10 years, many of its 184 member nations have marked the anniversary of the founding of WIPO with special events.