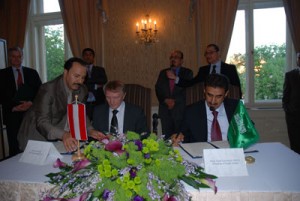 The Saudi Minister of Higher Education, Dr. Khalid Bin Mohammad Al-Angari, led a Saudi delegation in Vienna, Austria this week, in a visit meant to establish collaborative research and academic ties between institutes of higher learning in Saudi Arabia and Austria. An official service contract, signed by Dr. Al-Angari in the presence of the Saudi ambassador to Austria, Prince Mansour ibn Khaled al Saud, will encourage and support cooperative efforts between Saudi universities such as KSU, and will facilitate joint scientific programs, training courses, student exchanges, as well as medical research.

As part of their mission, the saudi delegation met with many Austrian notables such as Dr. Beatrix Karl, Austria's Minister for Science and Research, in order to discuss the future of relations scientific and research between the two nations. The minister assured his hosts that he desires to increase in the number of Saudi student scholarships for Austrian universities, while the Saudi cultural attaché in Austria noted the increase in Saudi scholarships for students to attend universities in Austria, the Czech Republic, Slovakia and Hungary.