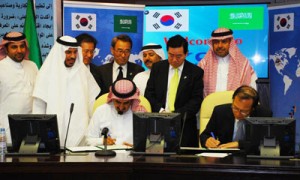 The delegation, which was organized by the Saudi Ministry of Higher Education (MOHE), included visits to a number of universities throughout the kingdom. KSU Rector Abdullah Al-Othman met with the delegation, and praised the Korean experience and their historical success with education. Dr. Othman noted how Korean society and its economy has benefited greatly from such an emphasis on education, and that such an emphasis is being applied at King Saud University, and throughout the Kingdom, especially in the areas of water, technological research and development.

The Korean delegation visited various sites on the KSU campus, such as the Riyadh Techno Valley. Having visited the laboratories of the King Abdullah Institute for Nano-Technology (KAIN), the delegation met with the University's Vice Rector for Graduate Studies and Scientific Research Prof. Ali Al-Ghamdi, who discussed matters of intellectual property and the registration and licensing innovations, as well as industrial leadership and the future cooperation between King Saud University and Korean Universities.

Kookmin University has extensive experience with desalienation research, having been awarded a 2 million USD research grant for their Research Center for Seawater Desalination Plant.