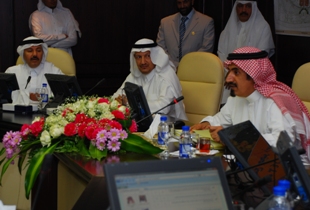 In the presence of King Saud University provosts, college deans and supporting deanships, Rector Abdullah Al-Othman recently opened the first session of the University Council for the 2010-2011 academic year.

Citing the celebration of the recent Saudi National Day and the commencement of a new academic year, Dr. Al-Othman began the session by urging all to recognize their important responsibilities to their nation.  He said this year should be brimming with creativity, excellence, and leadership and emphasized that the Kingdom's leaders harbor great expectations of KSU, which will require great efforts on the part of everyone.

He noted that academic accreditation is of marked importance this year as it is a vital tool for improving performance in the University. Dr. Al-Othman congratulated the Engineering and Agriculture Colleges on their 2010 accreditation by ABET, one of the world's most important accreditation boards, and applauded  the University's latest standings in the prominent Shanghai Ranking, which recognized KSU as one of the world's top 400 universities. KSU placed 391st, as well as first among all Arab and Islamic universities.

The Rector also lauded the new electronic admission operations and the efforts of the Preparatory Committee for improving the registration of students, and praised the faculty's increase in the quality scientific publishing. Some 736 KSU research papers were published over the past year  in academic and scientific journals.

The Thomson ISI, which publishes a list of highly cited researchers, places KSU publishing ahead of all other Arab universities. The Thompson ISI  is one of the key factors considered in the Shanghai Rankings.

Dr. Al-Othman underscored the fact that one KSU research team, working under the University Twinning Program, recently published its work in the prestigious Nature,  one of the world's most prestigious scientific journals . The Rector called for colleges and faculty to continue this trend, calling for yet more notable achievements in scientific publishing.

Prof. Ali Al-Ghamdi, Vice Rector for Graduate Studies and Scientific Research, informed the Council about the decisions made over the summer and revealed that the decisions had been imparted to the Saudi Minister of Higher Education and the KSU Council Chairman.

Also on the agenda was the requirement of service by faculty members and the appointment of new instructors, as well as the memberships of college and science councils and the recommendations of the permanent committee of scholarships and training to develop academic plans and university programs, and to graduate a number of students in senior studies.