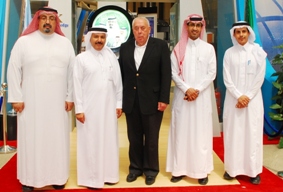 George Abbey, a professor at Rice University and former director of NASA's Johnson Space Center in Houston, was welcomed to King Saud University this week, where he met with officials to discuss venues of joint cooperation between KSU and Rice.

A Senior Fellow in Space Policy for the James Baker III Institute at Rice University, Dr. Abbey was a member of the team that received the US Medal of Freedom, for the key role its members played in the Apollo 13 space mission. He continues to serve as a policy adviser to NASA.

Dr. Alterkawi said that such ties are creating tangible progress at King Saud University, thanks largely to the vision, commitment and active leadership of Rector Al-Othman and Vice Rector Al-Ghamdi, who have been extremely successful in establishing academic and scientific ties between KSU and some of the top universities in the world.