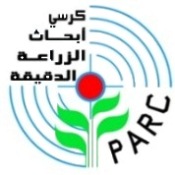 King Saud University’s Precision Agriculture Research Chair (PARC), an academic-governmental cooperative program supervised by Khalid Al-Gaadi, has recently launched an extensive study of modern farming, particularly in the Kingdom of Saudi Arabia. PARC, under Dr. Al-Gaadi, a professor of Agricultural Engineering in KSU’s College of Food and Agricultural Sciences, works to raise awareness -- not only in the Kingdom of Saudi Arabia but to the agricultural communities throughout the region and the world -- to the positive impact precision agriculture offers in terms of economy and the environment.

Precision agriculture is a method of farm management that provides the farmers maximum productivity with minimal impact on the environment. The process, which has been rapidly evolving since the 1960s, is being employed from the pre-planting soil evaluation stage through the harvest. The advances in precision agriculture have been necessary because of the increased size of farms, the spiraling costs of farming, the international emphasis on environmental issues, and the demands on productivity because of rapid growth in world-wide population.

The fundamental concept of precision agriculture began with the collection of data and making agricultural decisions based on that data.  Sometime in the 1960s -- when the demands for increased productivity became apparent -- technology became the catalyst for today’s version of the process, which includes equipment designed to determine the amount, and best, type of seed and the variable application of fertilizers, chemicals, and water. The most recent breakthrough has been the use of satellites to collect data and equipment that determines how to best apply that data to maximize production.

In its comprehensive overview, PARC’s primary purpose is to “serve as a research and training center” to implement the various revolutionary concepts and technology available, and eventually develop a mechanism to bring together the research, academic and supporting resources of King Saud University and the support of partners at other regional and international universities and agricultural centers.