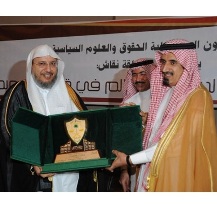 On behalf of Saudi Minister of Higher Education Khaled Al-Anqari, KSU Rector Abdullah Al-Othman presided over a panel discussion entitled: “Recent Orientations for the Court of Grievances in Indemnity Affairs, on 7 November.

In an introductory speech, the Dean of KSU’s College of Law and Political Science Rezeg Alrayes outlined the importance of this panel discussion and its main objectives.

Sheikh Ibrahim Al-Haqeel, chairman of Saudi Arabia's Court of Grievances, described the development of the Saudi judicial sector in recent years and the importance of its continued progress, especially in the area of administrative law, which has been a key  of Saudi Arabia’s King Abdullah. The Saudi monarch has launched a landmark project to improve the Saudi judiciary system, and Sheikh Al-Haqeel lauded  comprehensiveness of the King’s resolution to evolve the administrative and disciplinary law which has acquired jurisdiction over all litigation in which the administration is part, whether because of a decision, a contract or a material argument. He said preparations are now completed in the Board of Grievances to start compiling the master log of of the board’s administrative, penal and disciplinary edicts.

The panel included the following presentations:

The panel discussion concluded by establishing a set of resolutions:

King Saud’s accession to the throne in 1953 was followed by the establishment of the Court of Grievances, under the authority of the Presidency of the Council of Ministers, to function as the country’s principal administrative tribunal for claims involving the government. In 1955, a Royal Decree declared the Grievances Board an independent board, and in 1967, King Faisal issued a Royal Order granting the Court judicial independence from the Shari'ah Courts System.

In 1982, a new law made significant changes the Board of Grievances which became an independent administrative judicial body composed of a president, vice-presidents and members specializing in Shari'ah law.