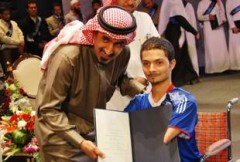 In the two-day Second Student Scientific Symposium, which took place in KSU a few weeks ago, several competitions were heatedly contested, with the male and female winners winning prizes totaling more than a million riyals. The award money is provided by KSU to encourage students to cultivate innovation, work hard and the exploration of the myriad venues of science and academics.