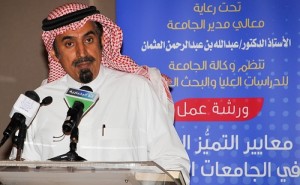 A workshop entitled “Standards for Distinguished Research at World Universities” and designed to establish new criteria in research distinction was sponsored recently by the King Saud University’s Vice Rector for Graduate Studies and Scientific Research.

The workshop was held under the patronage of KSU Rector Abdullah Al-Othman, who delivered a welcoming address and broadcast to the Female Center for Scientific and Medical Colleges in Al-Malaz.

Five lectures were featured in the workshop.

* “Rooting the culture of research distinction in universities,” presented by Professor Prof. Seeram Ramakrishna, Vice President of the National University of Singapore for Scientific Research Planning and an advisor to KSU for research strategies.

* “Standards of Scientific Research,” presented by Dr. Zuhair Abduljabbar, Secretary General of the National Commission for Academic Accreditation and Assessment, who also will review the commission’s experience.

A session also was devoted to discussion of the workshop’s major axes. 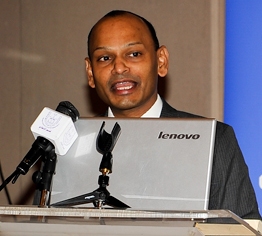 Dr. Ramakrishna, the workshop’s only visiting speaker, said that the transformation to research distinction is being applied in all international universities. He emphasized that many students throughout the world are working on research projects, demonstrating the importance of the concept. Last month in Taiwan, he revealed, more than 100 universities participated in an International University Council assembly and set standards of creative quality and scientific research, which he implied reflects the global interest in research distinction.

“The world is developing and we should do the same,” Dr. Ramakrishna said after revealing that $1.3 trillion is being invested on research and creativity. “The future is for research and scientific innovation, this is why the larger focus of our curricula for students should address developing their innovation and scientific research abilities. [For this reason, research distinction] should receive the ample funding it needs to turn their ideas in financial reward for them and their society.”

In his welcoming address, Rector Al-Othman explained that KSU’s development should be comprehensive, relying on knowledge gleaned from the world’s finest universities. He said that while KSU should be concerned with the development phase, he believes the time has come to emphasize a new phase as per decisions by the scientific and university councils.

“We turned our objectives into means and our means into objectives, but today KSU should enter a new phase and make the production of knowledge and the publication in academic journals [a major] objective of faculty promotion,” Dr. Al-Othman said. “The scientific publishing outlet is the pilot of research improvement.”

The Rector emphasized that scientific research is never a waste of time and money, but added that if the scientific 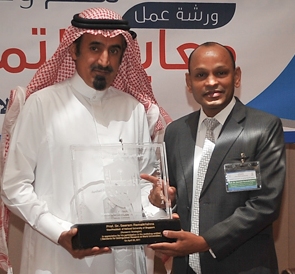 publishing does not have an impact on the economy, the society, and the individual, then it cannot be described as worthy. “A university must have a strong influence on its surrounds for students and faculty,” he said, “and our curricula should be designed as a booster of skills and development,” he said, adding that any research which does not enrich the national economy is a waste of money.

He cited three tasks that are fulfilled by useful scientific research.

*Service to humanity, an example being the improvement of human life through the creation of new technologies such as medical discovery.

*Creation of added value to the national economy.

A session was devoted to discussion of the workshop’s four major axes, with participation of faculty members in health, sciences and humanitarian specializations.

Dr. Ebtesam Al-Olayan spoke on behalf of the organizing committee to thank the Rector for his sponsorship of the workshop and support for research distinction in KSU and encouragement for its researchers.

She also thanked vice-rector and provost for senior studies and scientific research Dr. Ali Al-Ghamidi, for his support of the scientific committee, which planned the workshop and all those who worked for it.

Dr. Ramakrishna then gave a lecture entitled: “Rooting the culture of research distinction in universities”. He began by expressing his joy for being at the workshop, aimed to discuss how to turn scientific research into a successful knowledge economy. This transformation he said is now being applied in all international universities. He pointed out that there are many students around the world working on research projects, and this demonstrates the importance of this fact. He said last month in Taiwan, an assembly of the IUC (International University Council) was held with more than a hundred participating universities and they set the standards of quality in creativity and scientific research, which shows the growing interest among international universities. He said world countries now spends 1.3 trillion dollars on research and creativity only, because they know the benefit that will ensue

He said: “The world is developing and we should do the same. The future is for research and scientific innovation, this is why the larger focus of our curricula for students should address developing their innovation and scientific research abilities, and this should receive the ample funding it needs to turn their ideas in financial reward for them and their society.