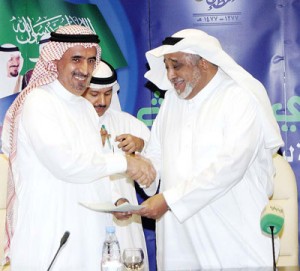 The disease has reached epidemic proportions, with studies confirming that 24.3 percent of Saudis are diabetic. Diabetes is a major health problem worldwide, with the toll estimated at more than 300 million.

Genetic factors and the Saudi’s changing lifestyle are major factors in the spread of diabetes. Observation of these factors will help provide a better understanding of the disease, especially because societies – the Saudi society in particular -- have strong family ties which facilitate the research.

The Chair’s goals are to seek an understanding of how genes are inherited, modified, expressed and regulated; to facilitate collaboration among researchers in various disciplines; and to train future generations of scientists in the field.

The Chair strives to define the human gene pool responsible for both Type 1 (which afflicts a person from birth) and Type 2 (adult-onset) diabetes. This will be carried out through the study of the human genome in Saudi society and by consolidating advanced genetics research in the Kingdom.

Specifically, the Chair will:

1. Study the human genome implicated in diabetes and pinpoint the area or areas responsible for acquiring Type 1 or Type 2 diabetes, ultimately them to pancreatic dysfunctions.

2. Pinpoint the genes implicated in chronic diabetes complications, such as neuropathy and dysfunctions in the retina, kidneys and blood vessels.

3. Involve students in graduate programs in the study of chromosomes that cause diabetes or its complications.

4. Consolidate pathogenic research in various locations in the Kingdom by attracting top scientists and researchers active in this field.

*Since March 28, 2009, the Chair has partnered with Lille University in France on research and has a service contract with Professor Philippe Froguel, Director of the National Center for Scientific Research at Lille University.