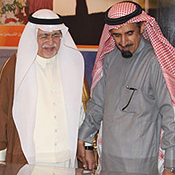 Received by KSU Rector Abdullah Al-Othman and several vice rectors and deans, Dr. Khojah began his tour at the College of Medicine, where he was shown some of KSU's internationally renowned research programs such as the Stem Cell Unit (SCU), the 1st of kind in the Middle East. Supervisor Dr. Abdullah Aldahmash presented an outline of the unit, including its advanced research and collaborations with distinguished international institutions such as the University of Southampton Faculty of Medicine, the Max Planck Institute for Molecular Genetics and Australian National University's John Curtin School of Medical Research.

Likewise, the Minister learned about projects underway at the Abdullah Bagshan Growth Factors Bone Regeneration Research Chair (GBFR), which is led by Dr. Khalid Al-Hezaimi. The GBFR currently collaborates with experts from high-profile institutions such as the Harvard Medical School, the University of Michigan School of Dentistry and the University of Southern California's Endodontic Graduate Program. GBFR is currently establishing the region's most advanced 3D Micro-CT imaging labs.

The campus-wide tour offered Dr. Khojah an opportunity to hear from various academic and scientific leaders, who gave the Saudi Minister insight into their institutions' ambitious and successes.

Dean of Libraries Saud L. Al-Rowaily showed the minister the Documentary Exhibition for Development Programs and then explained the activities of the Prince Salman Library, which include the transition from a paper library to one with a digital format, underscoring the library’s role in preserving many important historical documents.

The College of Arts provided a tour of the newsroom, which is responsible for the weekly printing of 30,000 paper copies the University's weekly newsletter. Newsletter supervisor Ali Alkarni outlined the history of the publication, which is now being provided in digital format, as well. He also noted that the newsletter is available at each KSU branch and hospital, as well as governmental facilities. Dr. Khojah was also shown a braille edition, which is distributed to the visually impaired.

At the College of Science building, Dean Abdulrahman I. Almansour, briefed Dr. Khojah on the college’s plans for expanded botany and geology specialties.

Dr. Mansur Al-Hoshan, Vice-Rector for Research at King Abdullah Institute for Nanotechnology (KAIN), elaborated on how his institution is increasingly providing Saudi Aramco and SABIC with skilled and ambitious workers. The Minister toured the KAIN's advanced labs, including one with an electronic microscope for making new materials on a nano (i.e. billionth in the metric system) scale.

At the College of Engineering, Dr. Khojah got a close look at the Advanced Manufacturing Research Centre (AMRC), the Riyadh Technology Incubation Center (RITC), the Intellectual Property and Technology Licensing (IPTL) program, the Sustainable Energy Technology (SET) Program and the Prince Sultan Advanced Technologies Research Institute (PSATRI). At PSATRI, the Minister learned about current projects being undertaken by both undergraduate and graduate students.

Dr. Khojah was also briefed about the Riyadh Techno Valley (RTV), the University Endowment Project and the University Medical City, a significant extension to the King Khalid University Hospital. These projects are KSU's largest-scale projects, which involve investment totaling more than a billion dollars.

In a statement to the press, Dr. Khojah said that he was proud and elated by what he saw, noting with pride that, in fact, he was a student at KSU when it was based in Al-Malaz and called Riyadh University. He called on all KSU students to be proud of their alma mater and to make the best of the university’s resources to build the scientists of the future. 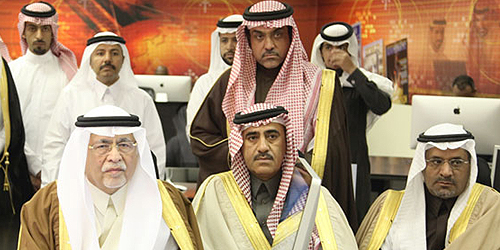