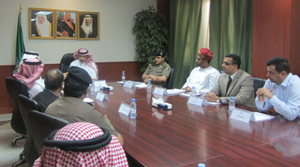 Al-Majmaah, situated in the east central portion of Saudi Arabia, has a population of approximately 45,000 residents.

Upon their return to Riyadh, the KSU researchers were scheduled to write a detailed report of their observations, along with suggestions of how to address the traffic problems.

The Prince Mohammed bin Naïf Chair for Traffic Safety, under the leadership of Dr. Hesham Al-Faleh, was established by King Saud University in the spring of 2011. The chair’s objectives are to support scientific research in traffic safety, recommend technology to be used in the development of more effective traffic systems and to improve and expand the training program for prospective traffic workers.