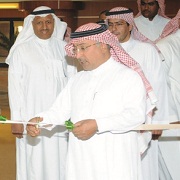 After the day's formal activities, the vice rector received a tour of the  library’s departments and divisions.

Among the projects was the Electronic Library Management System known as “Acknowledge,” which allows library users to access, consult and research the library’s data sources.

The vice rector also visited the Deanship’s Memorial Museum’s collection of rare pictures, documents, manuscripts and rare coins, most of which are found only in the Prince Salman Library. The vice rector received an update on the library’s efforts to digitize university newsletters, periodicals, rare books and manuscripts, making them accessible through the library digital system.

Dr. Al-Aameri received a presentation regarding future deanship projects, including its automated RFID (Radio Frequency Identification) technology and the external loan equipment which provides patrons with brief information on more than 300,000 titles by way of electronic indexing.

Dr. Al-Aameri was updated on the inter-university library exchange loan project and those projects consolidating information awareness for students and  remodeling the deanship’s building for people with special needs.

In one of the tour highlights, the vice rector opened the new scientific theses hall and the renovated dedication and exchange department and was then presented  a detailed audiovisual presentation on services and users.

The visit and the opening were attended by Dr. Mohammad Al-Shamrani, the deanship’s vice dean of Development and Quality, and Dr. Hussein Al-Qahtani, vice dean for Technical and Technological Affairs.

The Deanship of Library Affairs was established in 1974 and developed into an academic body with full membership into the University Council, after being merely the Department of Libraries.

The Deanship of Library Affairs supervises all university libraries in Riyadh and covers all activities relating to publications, data, holdings, circulations and the representation of the university both locally and internationally.

At the start of the 1984-85 academic year, seven of these libraries were merged into one central library at the new campus in Riyadh. The library of the Deanship of the Community Services also was established at its location in Nasiriyah in Riyadh. 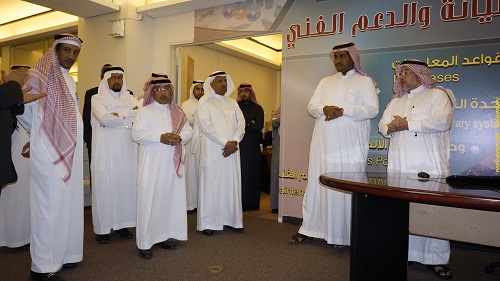 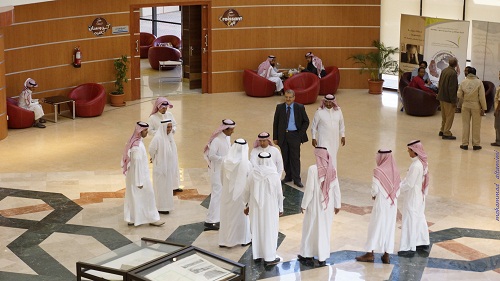