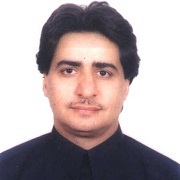 As part of the King Saud University’s newly-established lecture series within the biochemistry department of the College of Sciences, Professor Majed Alokail gave a talk entitled “The Epigenome of Kidney Cancer,” a general introduction about kidney cancer, its primary categories, causes and implications.

Histone proteins are highly alkaline proteins that package and gather the DNA into structural units called nucleosomes. Changes to the epigenome can result in changes to the structure of chromatin and changes to the function of the genome. The epigenome is involved in the regulation of gene expression, development, tissue differentiation and suppression of transposable elements.

In the final segment of his lecture, Dr. Alokail discussed the results of his studies and the advanced technologies he has used, among them being the Infinium Human Methylation450 BeadChip Kit. This unique mechanism’s comprehensive, expert-selected coverage and high sample capacity combined with its affordable price makes it an ideal solution for large sample–size, genome-wide DNA methylation studies.

The DNA methylation studies play a crucial role in the regulation of gene expression and are an essential for guiding normal cellular development and maintaining tissue identities. Methylation denotes the addition of a methyl group to a substitute or substitution of an atom or group by a methyl group – a methyl group being an alkyl derived from methane. 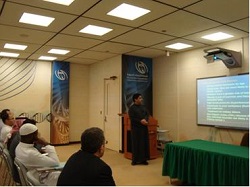 Dr. Alokail elaborated on Ingenuity Associated Pathway Analysis software, which allows in-depth and contextualized findings to help understand the mechanisms of a disease. Among the other benefits, it allows the Identification of genes and proteins associated with the etiology of a specific disease and the prediction of drug targets. He also discussed software and applications used in result analysis.

In his summation, Dr. Alokail concluded his lecture with a presentation of his research’s major results, offered recommendations and then welcomed questions from the audience.

An international authority in biochemistry, Dr. Alokail received his bachelor’s and master’s degrees in biochemistry from King Saud University, his Ph.D in molecular pharmacology from Southampton University in the United Kingdom and a high diploma in insulin gene therapy from Gunma University in Japan.

He is extremely active in cancer research, has frequently been published in many refereed scientific journal papers, authored chapters in international reference books and frequently spoken at international scientific conferences. Last November, he was among the featured speakers at the 2nd annual Middle-Eastern Association of Cancer Research (MEACR) Conference in Tunisia.