KSU Rector on importance of Arabic at ALI forum 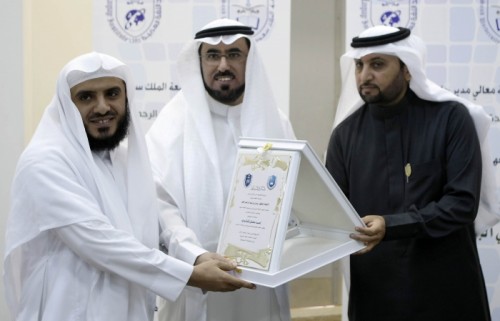 Rector Al-Omar did not attend the event, organized by the KSU Arabic Language Institute (ALI), but was represented by KSU Vice Rector for Educational and Academic Affairs, Dr. Abdullah S. Al-Salman, who presented read the rector’s speech that went on to explain the KSU rector’s views.

Rector Al-Omar emphasized that forums such as the one initiated by KSU can be the basis for the joint action and fruitful cooperation that KSU has always strived to establish between Saudi universities.

He added that it was his hope that this first forum will be an initiative for coordination between Saudi institutes in matters such as registration, admission, scholarship grants, scientific research, preparation of curricula and linking of scholarships to the university and local communities in universities where Arabic is studied.

Rector Al-Omar also said he wants to help establish leagues for the alumni of these institutes.

“These and other topics are worthy of concern and follow-up,” Dr. Al-Salman said reading Rector Al-Omar’s conclusion, “ and it is the duty of the deans of these institutes to coordinate, to exchange expertise and advice to bolster strong points and to avoid drawbacks for the benefit of all.”

He said this first ALI forum is one of the initiatives of the fourth objective of his institute’s “Strategic Plan,” which is supported by KSU and supervised by the ALI.

The overall objective, he said, is two-fold: to conduct an ALI forum for KSU deans this year and to hold an international ALI conference in 2014.

Dr. Al-Kahtani said his institute is already working to receive, referee and publish research papers to include in a proceedings book for the conference.

Dr. Al-Kahtani explained that the five percent ratio is good for non-Saudi students, but does not take into consideration the situation of Arabic language institutes.

He said he hopes KSU will adopt a plan exempting the institute from the University’s fixed ratio and increase the number of students.

A number of Arabic Language Institute Deans from around Saudi Arabia were honoured at the end of the ceremony.