The winner of the 2005 Nobel Prize for Physics visited King Saud University earlier this year, touring the King Abdullah Institute of Nanotechnology (KAIN) facility and meeting with the institute’s leaders and staff.

Professor Theodor Hänsch, also the director of the Germany's Max Planck Institute of Quantum Optics, was greeted by KAIN's dean, Abdallah M Azzeer, and the Institute’s vice secretaries, Zeid Al-Othman and Mansour Alhoshan, at the start of his visit.

Professor Hänsch, last visited KSU in 2010 when he was joined by other Nobel Prize winners, American professors Anthony Leggett and Ray Glauber. 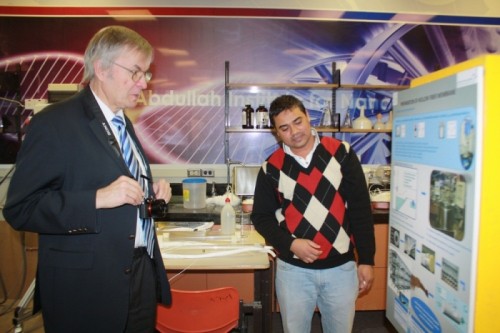 During the visit, KAIN staff discussed with Hänsch a number of their theories and the problems confronting them in their research.

Hänsch, who ranks among the world’s top 10 “Super Scientists," then toured the Institute’s laboratories and cleanroom and reviewed a series of the Institute’s recent research.

Before departing, Hänsch commended KAIN’s remarkable progress since his last visit and wished the facility’s leaders and staff continued success in their research.

The remarks were greeted with profound appreciation and gratitude, considering professor Hänsch's background.

He has not only won a Nobel Prize for his contributions to the development of laser-based precision spectroscopy, but mentored Nobel Prize-winning scientist Carl E. Wieman, and received Saudi Arabia's 1989 King Faisal International Prize for Science.