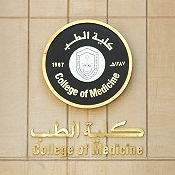 The ceremony was held in the college’s main hall, and was attended by the dean of medicine, Dr. Mubarak F. Al-Faran, as well as college vice-deans, department heads, and a number of faculty.

In his commencement address, Rector Al-Omar stressed the importance of the College of Medicine to KSU.

He also congratulated the male and female graduates, wishing them a prosperous future and thanking Dean Al-Faran and vice deans, in particular the vice dean for postgraduate affairs, Dr. Ahmed Y. Al-Ammar.

Al-Omar also praised all members of the graduate studies unit, including the faculty members, for their distinguished efforts.

Dean Al-Faran said he took great pleasure in the commencement of this latest class, and said that KSU, and particularly the College of Medicine, was dedicated to preparing highly trained personnel in all specializations.

He ended his speech by reminding the graduates that they should adhere to the ethics and devotion of Islam, encouraged them to continuously seek knowledge in their constantly evolving profession, and wished them success in their future careers

Al-Faran also expressed his gratitude for Rector Al-Omar's continuous support for the College of Medicine and university hospitals.

During the ceremony, the director of the Graduate Medical Education Centre, Dr. Abdulkareem Alsuwaida, said the centre was established in 1984 and now offers 46 training programs, including fellowships both in general medicine and precision specialties.

Alsuwaida lauded the centre’s role in producing capable physicians at an international standard to fulfil the needs of the medical sector.

During his speech, Dr. Al-Ammar underscored the importance of the Continuous Medical Education Center at the College, and its role in graduating new classes of accomplished individuals every year.

He pointed out that the College of Medicine is the first college in the Kingdom to specialize in medical graduate studies, and said that graduating is only a first step which needs to be followed by creativity and distinction.