Comedies don't normally address the big questions of society, but for the King Saud University Theatre Club comedy is their medium for dealing with the pressing issues faced by Saudi culture.

“The Value of Homeland” is the latest production by the club, which comes under KSU's Preparatory Year Deanship and aims to reinforce the idea that homeland should come first.

In the play the lead is lured away from Saudi Arabia and it's traditions by the glamour of the west, against his father's wishes.

His father tries to instil in him the importance of the homeland and a commitment to national beliefs, but he doesn't want to listen.

In contrast, the lead's big brother remains true to his culture and his principles, despite wanting to travel. 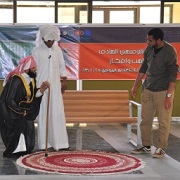 In the play the characters were many and varied, reflecting the variety of the Saudi culture and enabling the actors to stretch their skills.

Techniques such as dream sound effects were used widely by the actors to symbolise  the lead's awakening to the importance of culture.

Overall the play stressed the need for the young to give what they can for the nation's development but argued that western culture shouldn't overshadow national customs, traditions, and norms.