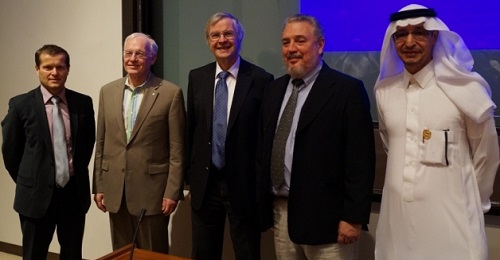 A Noble Prize winner was amongst a group of eminent physicists meeting staff and students during a special visit to the King Abdullah Institute for Nanotechnology at King Saud University earlier this month.

Professor Krausz and professor Kourkom had been specially invited to receive the King Faisal International Prize for Science for 2013.

The scientists inspected current research in the fields of water, power, medicine, and how to chemically prepare samples for nanotechnology using deposition via pulse laser and the different ways to detect properties of such material.

Following this professor Hänsch gave a lecture entitled “Laser Frequency combs - applications from the atomic to the cosmic scale”, which was attended by researchers from the institute.

The lecture was also live broadcast for girls to the Center for Scientific and Medical Studies at the Al-Malaz campus.