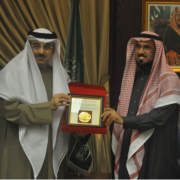 The Delegation also discussed possible aspects of cooperation with KSU and  Bahrain Polytechnic in the field of agriculture.