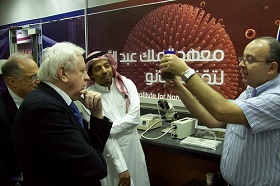 King Abdullah Institute for Nanotechnology (KAIN) recently received Professor Jan Sadlak, President of the IREG Observatory on Academic Ranking and Excellence (IREG Observatory) and Robert Morse, Director of Data Research for US News & World Report magazine, responsible for the magazine annual ranking of US colleges and schools, and the founding and executive committee member of IREG Observatory.

Further, the visit program included a tour in KAIN laboratories, and the observation of some scientific experiments designed by KAIN for students and for the scientific popularization of nanotechnology in the society.

The visitors were introduced to the laboratory of Electron Microscopy, where the working principles of scanning and transmission electron microscopes were briefly presented. The visitors also witnessed a simple experiment showing the response of iron oxide nanospheres, produced in KAIN laboratories, to a magnetic field, and the medical applications of this experiment were also presented. They also visited the Pulsed Laser Deposition (PLD) laboratory, and were introduced to its applications in petroleum and renewable energy fields. 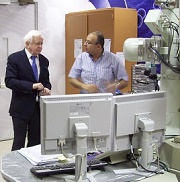 Moreover, the visitors expressed their appreciation and impression for the visit program, and hoped every success for KAIN and its staff. The delegation was received by Dr. Abdulaziz Alhazaa, Deputy Dean for Technical Affairs. The KAIN Dean Aws Alshamsan, explained that institute is keen to benefit from such global expertise, and that these visits contribute to the development of scientific and administrative environment that will ultimately support the value of scientific research, and that leads to achieving the objectives of the Strategic Plan of KAIN and KSU.