Under the patronage of His Excellency Prof. Dr. Badran Bin Abdulrahman Al-Omar, the University's Rector, a ceremony was held to honor the outstanding students who passed the enrichment and summer training programs in the program of distinguished and talented students, and also to honor the participating and supporting entities on Thursday 15/1/1439 H. The ceremony was attended by Their excellences: Vice Rector for Educational and Academic Affairs Dr. Abdulaziz Bin Abdulla Al-Othman, members of the Permanent Executive Committee of the Program, Dean of Scientific Research Dr. Khalid Al-Humaizi, and a number of Their Excellences the Deans, Associate Deans, and Heads of departments from various colleges of the University. The ceremony was also attended by the coordinators and supervisors of the program in the colleges, the program administration staff, as well as the representatives of the participating and supporting entities for the enrichment and summer training programs. 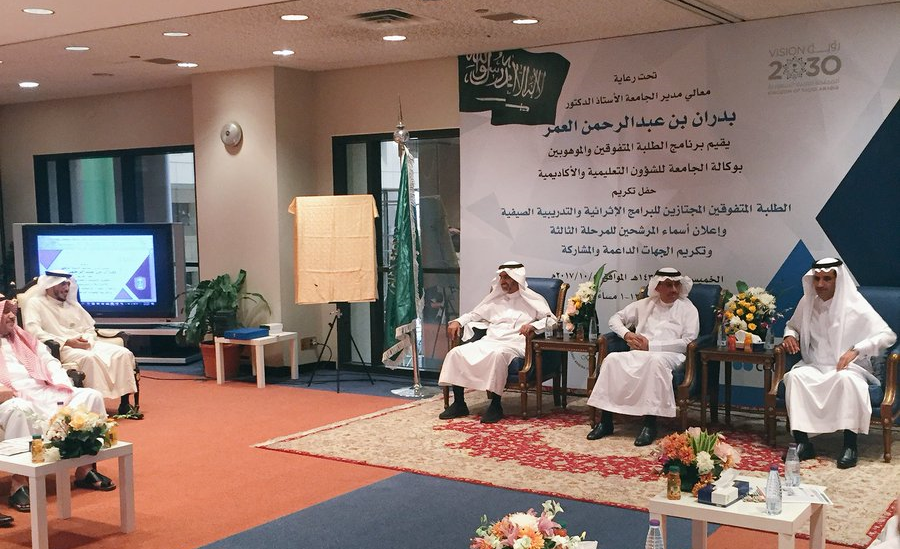 The ceremony started with a video presentation on the most important achievements of enrichment and summer training programs availed by this Program, which was supported by the University's administration for outstanding students, during the past summer on both the internal and external levels. The video presentation was followed by a speech by the Director of the Program Dr. Ali Al-Dalbahi who reviewed the achievements of the program during its first and second years. He pointed out that the preparation of this quality program comes within the context of the requirements of the current and future stage of the country's prosperity and progress, and is in line with the national strategy for transforming into the knowledge society based on the vision of the Kingdom 2030. 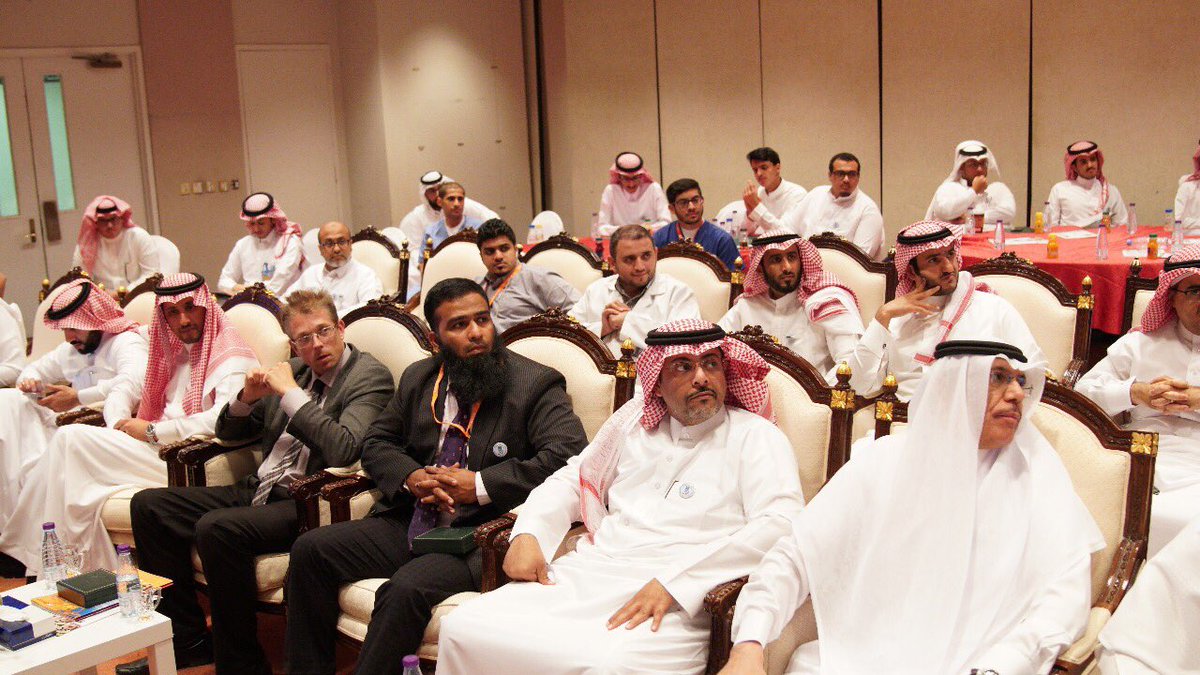 During the ceremony, a number of students of the program presented their distinguished experiences and spoke about the care they received in the program on the scientific, practical, and personal levels, as well as their achievements which contributed to refining their knowledge, skills, and attitudes. After that, the students who passed the internal and external summer enrichment and training programs welcomed the honor granted to them by the University's Rector and were handed certificates congratulating them on their achievements. Later, the University two talented students Yasser Abdullah Al-Thiabi and Ibrahim Bin Abdullah Al-Hudayef presented to the University’s Rector their two golden medals they won in the second national competition for skills. 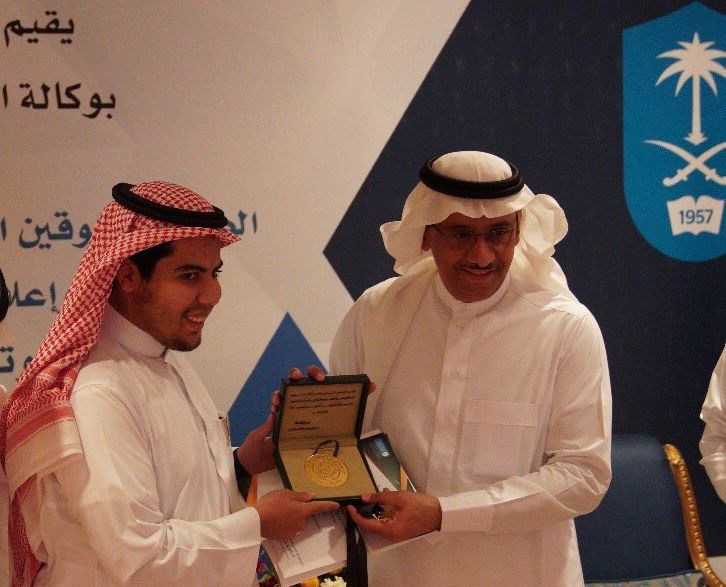 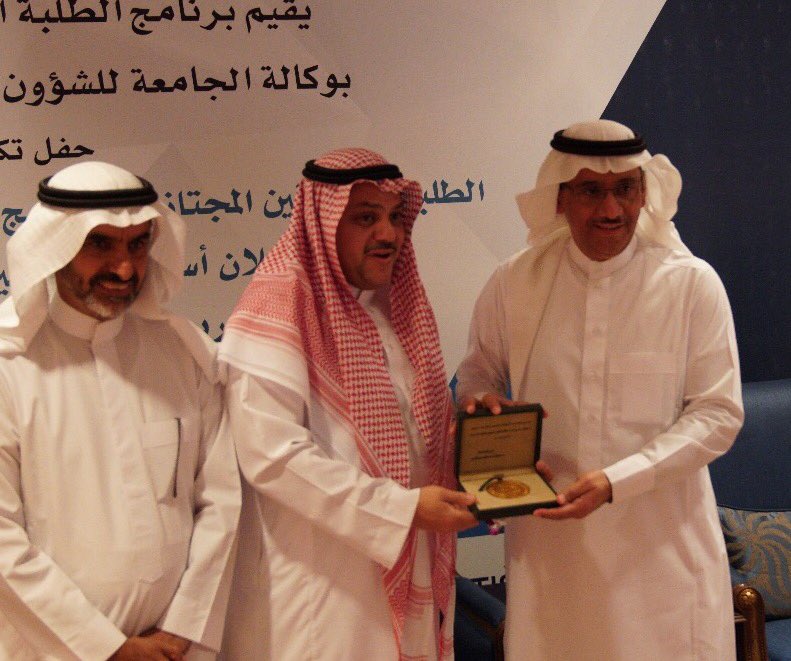 As part of this ceremony, His Excellency announced the names of the students and candidates nominated for the quality dimension of the program, and this included the specialist preparatory stage consisting of 196 students, and the announcement of 250 students to join the path of "students of continuous excellence," for the purpose of receiving further care and attention. He also inaugurated the English page for the program’s website: http://dsp.ksu.edu.sa/en. After that, the Rector of the University and the Dean of Scientific Research, Dr. Khalid Al- Humaizi, inaugurated 100 research grants to the students offered by the Deanship of Scientific Research. His Excellency, the Rector, stressed the importance of these scholarships and the nature of their high competitiveness, their role in enhancing the research potential of the students of the program, and providing the scholarships outputs as an important support for the University's progress and aspirations. The Dean of the Deanship of Scientific Research also explained how students can apply for these grants, how to deal with them, and the outputs required of them. 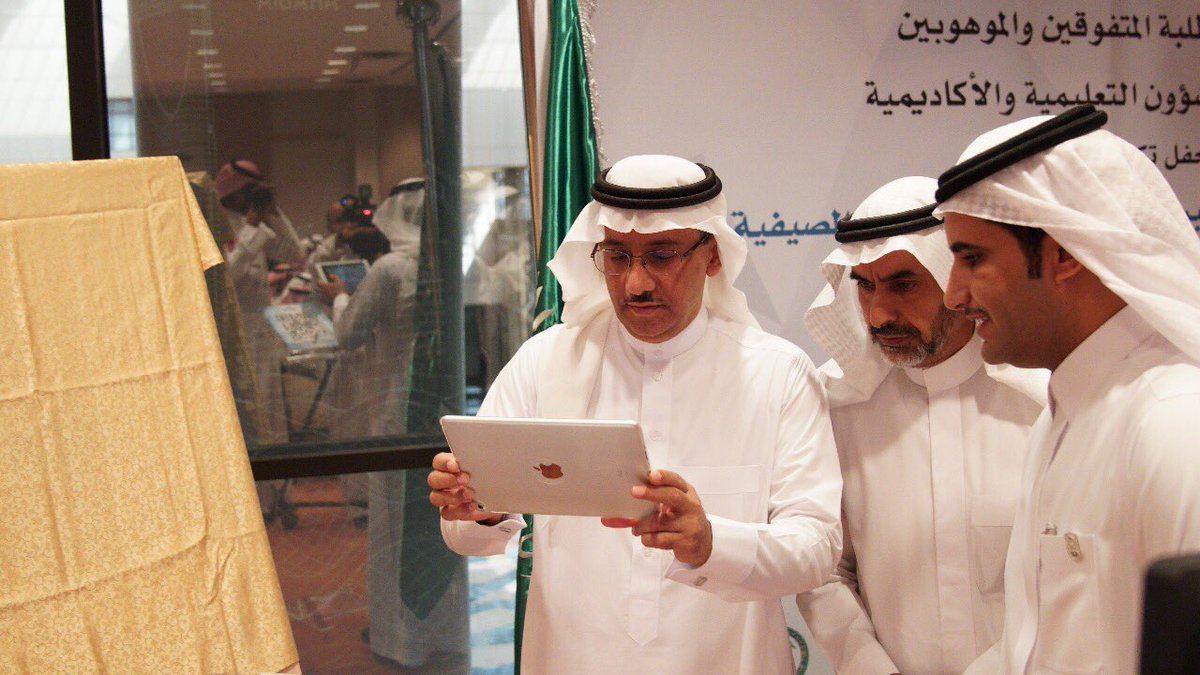 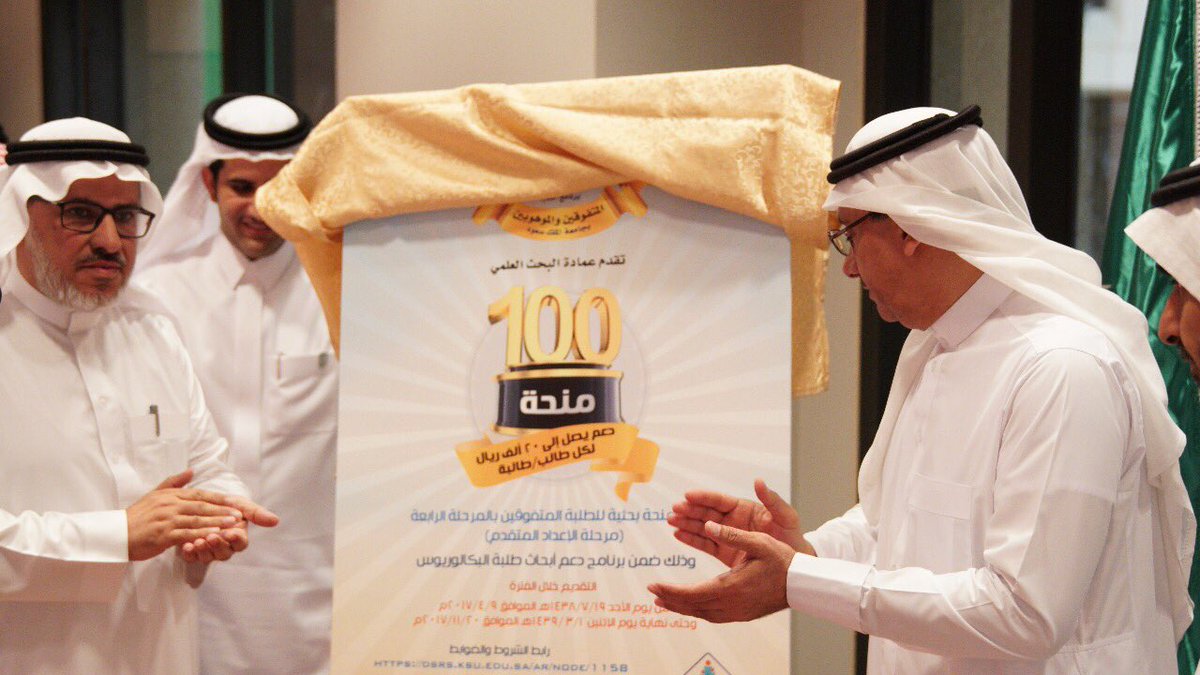 At the conclusion of the ceremony, the Rector expressed his deep thanks and appreciation to all those who contributed with loyalty and worked hard to ensure the success of the University and its strategic directions in serving the country and its outstanding students. Then, the Director of the program praised the pivotal role and continuous support of His Excellency, the Rector, and the Vice-Rector for Educational and Academic Affairs. He thanked them for their continuous diligence to establish the foundations of excellence and talent by planting them in the hearts of everyone. He also extended his thanks and gratitude to them.  At the end of the ceremony, His Excellency Dr. Abdulaziz Al-Othman, Vice-Rector for Educational and Academic Affairs, handed over the program’s annual report and memorial photographs were taken with the students and the participants. 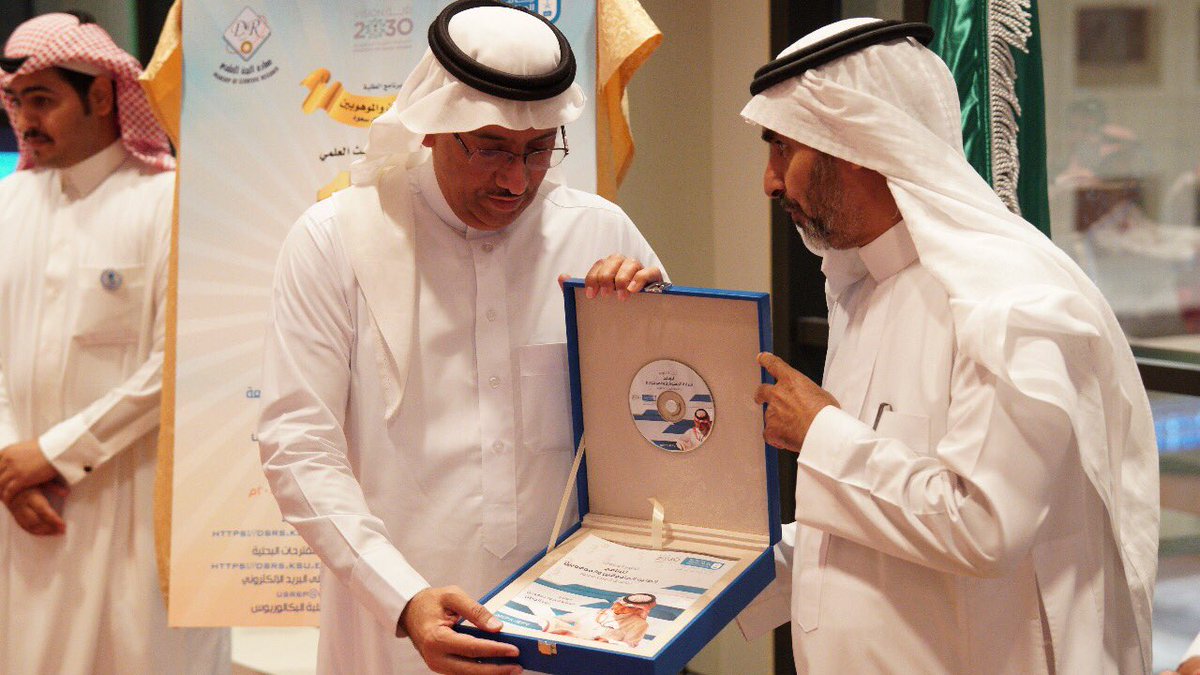 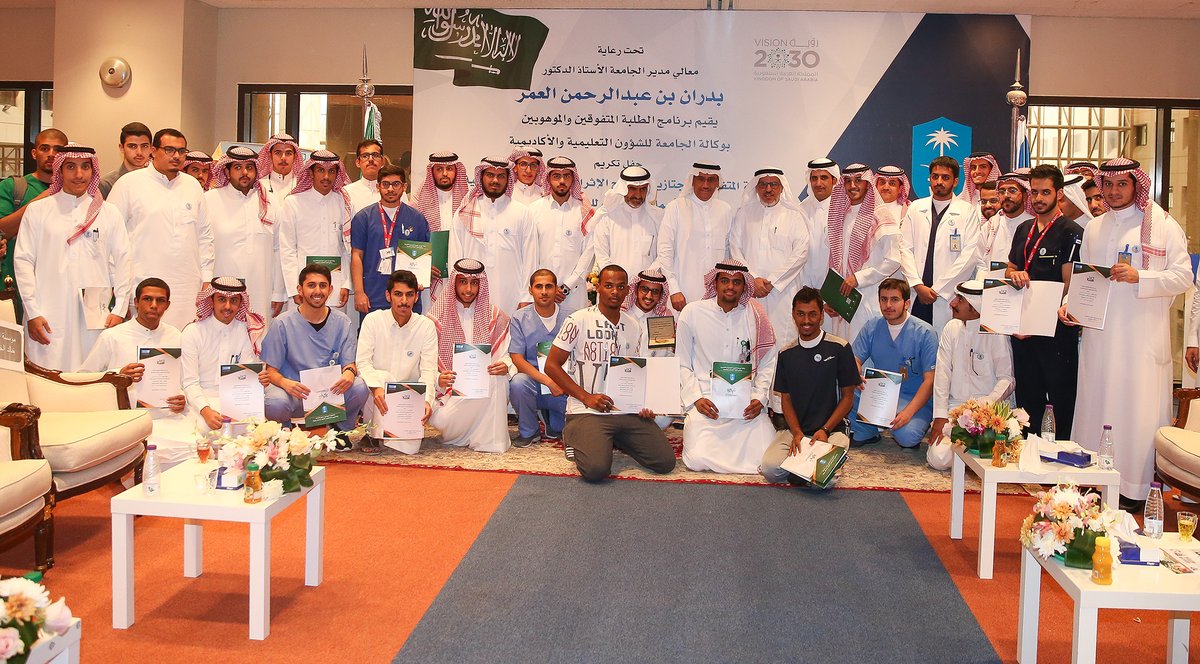