Multiple worlds, because one world insufficient

On Thursday, 23/12/1438. The summer program “Awalem” (multiple worlds) in its second version was brought to an end after an extremely informative and a fun week

Awalem program aims to open new horizons in the field of technology and to inform students about the basics of computing and the concept of programming in a simple and exciting way. This year Awalem program included two tracks, the first track (general track) targeted students in the age group 14-18, it provided three basic workshops, fun code workshop, electronic components workshop and smart robots workshop. A new track (game development) was introduced in Awalem this year to design and develop adventurous games. This course targeted the students who are interested in the computer and information sciences

The fun code workshop
in two days, the students learned to program in processing language which is considered one of the preferred languages for beginners because it’s designed to teach the programming principles in a visual manner. The students also learned the basic programming concepts such as variables, processes and repetition. the students were able to program by writing commands that draw geometric shapes in addition to changing colors and font sizes. The workshop included a number of activities such as decoding to complete certain drawings using processing language. The workshop was done by Ms. Moneera Alajlan with the help of the faculty students: Rahaf Alomar, Ghada Bahliwah, Sara Alqbaisy and Renad Melhy.

The electronic components workshop
In this workshop, the students were taught about programming electronic components using Arduino software to implement different programs in innovative ways and new methods, this helped trainees improve their sense of judgment by facilitating their imagination process to help them know what they want to design and then start building and programming the device.

Arduino is an open-source electronics platform based on easy-to-use hardware and software. In this workshop, the students were able to identify the components of the Arduino board and how to program it, also control and test the inputs and outputs. They did some experiments and wrote their own commands, such as experimenting with traffic lights in a fun and challenging way. The workshop was presented. By Ms. Haila Al Mazroua with the help of the faculty students: Rehab Al Zahrani, Reema Al Husaini, Shahad Alahaidab, Maram Alsalem.

Smart robots workshop
For the next two days, the students learned about the robot's concept and basic components, they also learned how robots can adapt to the surrounding environment and how to execute the correct decisions. The workshop included a number of different activities such as, (my robot friend) that aims to explain how a robot works and receives a command. Another activity was the maze challenge that depends on robot programming using IR radiation to make the robot avoid the maze obstacles. the workshop was presented by Ms.Lama Alssum with the help of the faculty students: Saba Alnasser Doha Alaseeri, Hanouf Aldawood, Hanan Alateeq.

The workshops also included a number of interactive activities that aimed to enrich the students’ knowledge in some important technology fields and to broaden their horizons to keep up with the modern age of technology.  Ms.Ghada Al-Sabeel prepared the contents of these activities as follow: binary number system, databases, information hiding and sorting algorithm. Ms. Ghada also supervised the students who presented these activities and they are: Maha Al-Dahim, Nof Al-Sagheer, Abeer Al-Kharayef, Razan Al-Askar, Latifa Al-Juaiad and Hala Al Mazroui.

- Game development track
Developing games is not just drawing and writing commands, the game has many elements, the most important element is entertainment, and in order for it to be a good game it must trigger the curiosity of the player and encourages them to search and explore. In this workshop, the students learned the basics of game development and how to design Point & Click adventure games. the students were able to add interaction and puzzles and learned how to guide the player to do the right action using hints and dialogue, also how to keep track of the progress in the game using creator adventure tool. The workshop was presented by Ms.Laila Al-Babtain, KSU master program and a program developer at SemaphoreLab studio for game development, and her assistants Atheer Alkbeer, Lama Allmshkhs and Meshael Alsleem.

The fifth and the final day of Awalem program was concluded with a closing ceremony which included the graduation of the special and outstanding Awalem students who were passionate about learning. And in the ceremony, everyone who contributed was thanked for their role in making Awalem the successful program it is today. Specially Dr. Mansour Alzear the vice dean of CCIS and Dr. Hessah Alsalamah the vice dean of CCIS for her dedication and ongoing support, Ms. Najla Almarshad from the media unit for her efforts and hard work also our enthusiastic teachers Ms. Lama Alssum, Ms. Muneera Alajlaan and Ms. Haila Almazroua for their initiatives to bring this program to life, and their efficient management of the workshops and activities. Also, their great efforts to simplify the information and make it easier to digest for the students. And finally, for the volunteered students for their amazing efforts. 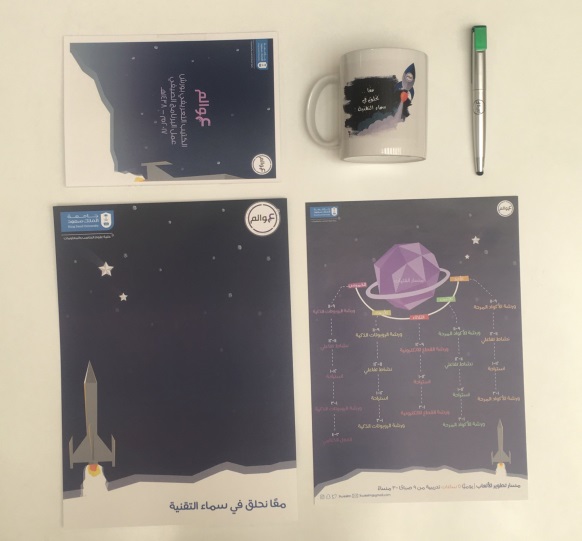