The Center of Excellence in Information Assurance (CoEIA) at King Saud University organized the third session of Science 20 (S20) webinar on “Digital Revolution: Navigating Critical Transitions” on 31 August 2020. The Webinar addressed the digital revolution from the S20 perspective, and discussed disruptive technologies that are needed to accelerate the transition to emerging technologies including cybersecurity, connectivity, AI, big data, IoT, and smart communities. 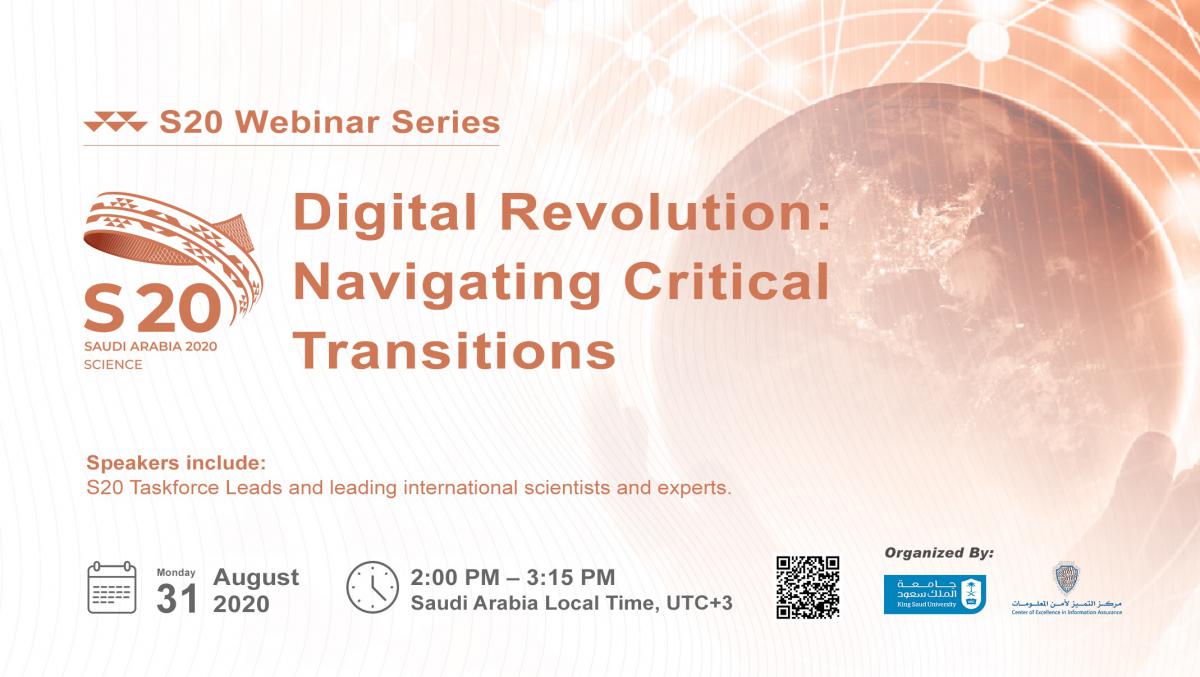 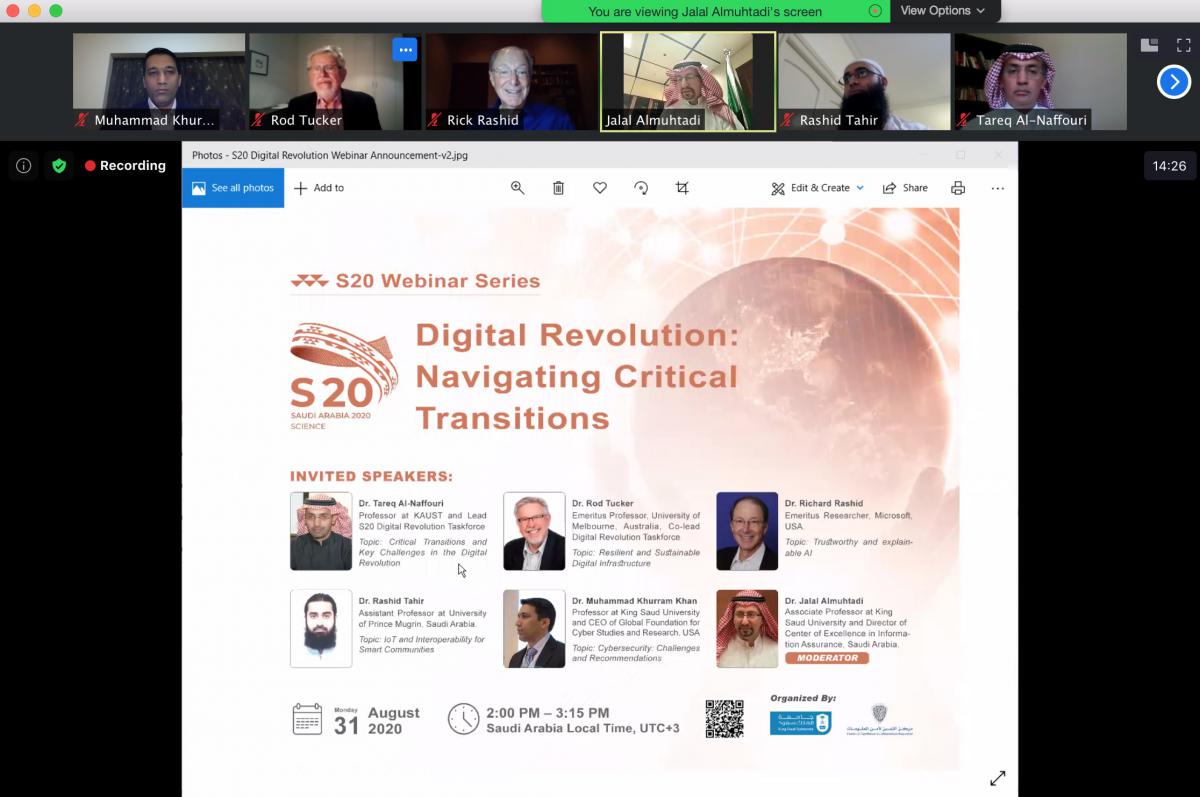 Dr. Jalal Al-Muhtadi started off the webinar by welcoming the speakers and a large number of local and foreign audience. To introduce the objective of webinar, he highlighted the importance of the digital revolution, which is making profound impact on society and the global economy in the era of the fourth industrial revolution.

Followed by the opening session, Prof. Tareq Alnafuri, the co-lead of S20 digital revolution task force, presented his speech on “Critical Transitions and Key Challenges in the Digital Revolution”. At the outset, he introduced the main theme of the task force, which shares the vision of a future society, where digital technologies will be integrated into all aspects of our lives to benefit humanity. He also highlighted a number of critical transitions in the way of digital revolution and how foresight analysis could help to identify and solve them.

In the next speech entitled, “Resilient and Sustainable Digital Infrastructure”, Prof. Rod Tucker, the co-lead of the digital revolution task force, discussed the importance and need for the uninterrupted digital revolution. He emphasized that the digital infrastructure must be resilient and sustainable even in the cases of extreme events to provide services to the users.

The third speaker, Prof. Rick Richard delivered a talk on “Trustworthy and explainable AI”. He discussed his experience at Microsoft for real-time spoken words speech to speech translation, which was made possible by the power of artificial intelligence. He also underscored the importance of deep learning in the current digital revolution.

The next speech was delivered by Dr. Rashid Tahir on “IoT and Interoperability for Smart Communities”. He discussed the challenges of the internet of things specifically for the smart communities, which have a phenomenal impact on the digital revolution. He also highlighted the issues and challenges in IoT from the perspective of interoperability, data sharing and data management.

Last but not least, Prof. Muhammad Khurram Khan presented a speech on “Cybersecurity: Challenges and Recommendations”. He pointed out that cybersecurity threats are evolving with greater magnitude, impact and sophistication and making a huge impact on the hyper-connected world. He highlighted that a new wave of cyberattacks could impact our political or social values, compromise national security and sabotage the critical infrastructure that may cripple down our socio-economic system. He stressed the importance of cybersecurity as it is becoming a complex national security issue that needs to be carefully understood and addressed by our leaders and policy makers. Finally, he emphasized that we need to work in a triple helix-model where universities, private and public sector organizations should collaborate to address the cybersecurity challenges. He also recommended that academia, industry, business organizations, civil society, and law enforcement agencies should work hand in hand to build a resilient and safe cyberspace.

The event was followed by a Q&A session, in which the moderator Dr. Jalal Al-Muhtadi and the audience asked a series of questions to the speakers. Finally, the speakers also shared their concluding remarks, which could play an instrumental role to draft the recommendations of the S20. 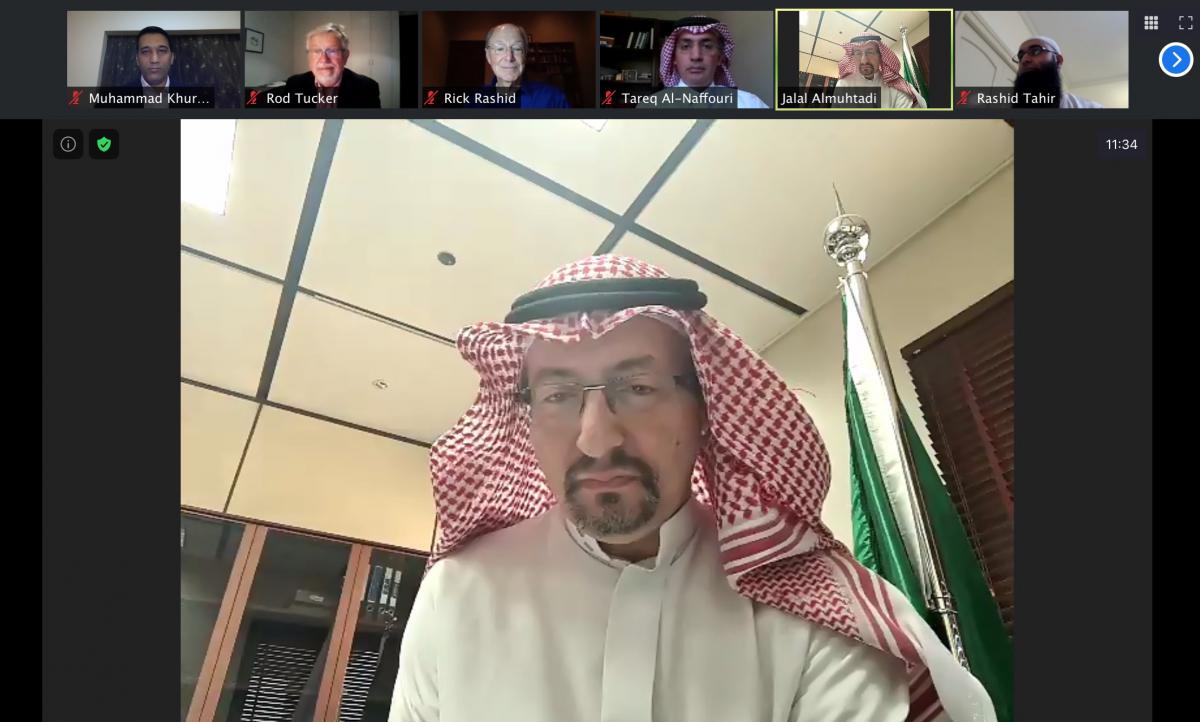 It is to note that the S20 is one of the engagement groups of the G20, which fosters official dialogue with the scientific community, and is led by the national science academy of the host country. The major goal of the S20 is to present policymakers with evidence-based scientific recommendations on the selected topics of interest.