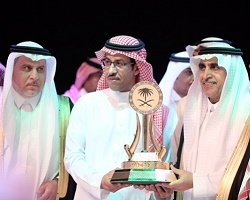 The KSU also received a one million SR award in the closing ceremony as a prize money.

The ceremony was held at Hamad Al-Jasser Hall, King Saud University in the presence of university vice rectors and the President of the Sports Federation of the Universities of Saudi Arabia and advisor to the Minister of Education for student activities Professor Walid Bin Abdul Razak Al-Dali.