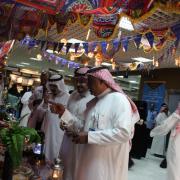 The campaign was named “Health Awareness for Fasting” showcasing a wide selection of various kinds of Dates in Saudi Arabia and its nutritional value, healthy food samples, and alternative food resources. The planning committee for this event provided healthy guidelines for diabetic patients on how to manage their medical condition, in addition to scheduling their medication during the Holy month of Ramadan. The visitors of the campaign were introduced to the most prominent health issues they might face while fasting, and how can they avoid such problems.

The participants has also contributed in presenting pamphlets with diabetes diets and food tips, which consist of the following calories ( 200, 1800, 1600, 1400) per person. The campaign hosted a number of nutrition specialists who answered questions regarding healthy habits and diets during the Holy month of Ramadan.

During his speech, Dr. Al-Obailan has stated that the campaign has been running for several years now, wherein it focus on educating all patients of King Saud University- Medical City (KSU-MC), to spread health awareness in the community. He also stressed the importance of the campaign on providing healthy diets for the visitors, and the effects on each disease. Dr. Al-Obailan also conveyed his gratitude to Dr. Abdulrahman Al-Muammar, Chief Executive Officer, King Saud University- Medical City and Vice Rector for Health Specialties, King Saud University, Professor Fahad Al-Zamil, Dean of College of Medicine and Supervisor of University Hospitals, for their untiring support of conducting significant events towards building a healthy environment for a society free of diseases.