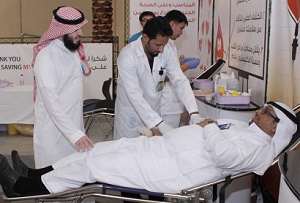 The KSMC Chief Executive Officer Abdulrahman Al-Muammar, and the PYD Dean Nami Al Jehani, as well as the Deanship's vice Deans and officials attended the campaign.

Basically, this event was a fruit of continuation cooperation between KSUMC Blood Bank and the Deanship, for the good of the community, especially the people in need of blood.

In addition, Dr. Al-Muammar explained that blood donation is beneficial in many ways including activation of blood circulation and stimulation of bone marrow to produce the various types of blood cells after donating. Blood donation also reduces the risk of heart disease and arterial clots by lowering the level of iron in the blood. He also assured that donors are checked prior to donation for blood-transmitted diseases such as AIDS, Hepatitis B & C, Syphilis and Malaria.

Further, Dr. Al-Muammar expressed his gratitude for the Dean of Preparatory Year and the Program officials at the Deanship for hosting this noble humanitarian campaign.

Being the first to donate blood, Dr. Al Jehani stressed that this deed is a religious and national duty towards the community and is part of the institutional integration among the country's sectors.

Moreover, Dr. Al Jehani pointed out that the campaign aimed to encourage the students' engagement in humanitarian work and to strengthen the value of altruism in the community. He maintained that such campaigns save lives through supporting the blood banks and hospitals in Riyadh and the holy places, especially since the Hajj season is approaching, where the need for blood units is greater.

It is worth mentioning, donors from the Deanship included faculty, staff and students also, who hurried to participate in the campaign and donate blood. 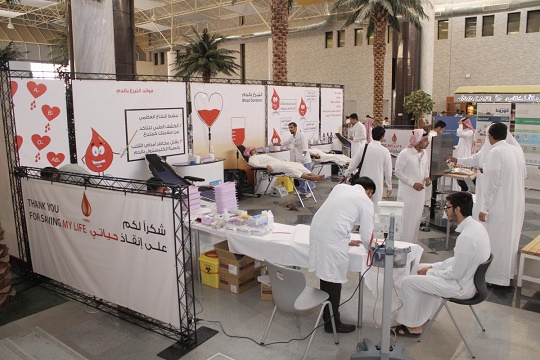