Also the Vice-Dean for Student Affairs gave a speech in which she praised the role of the Deanship of Scientific Research through the program of supporting undergraduate students in supporting research mobility. She also thanked the Vice Dean of Scientific Research and the program director Dr. Abeer Al-Masri for her outstanding efforts in promoting the scientific research culture among undergraduate students

Dr. Abeer Al-Masri gave a presentation on the program and its initiatives, categories and mechanisms support . She then presented the program's outputs throughout its various courses and announced the names of the first batch of students accepted in the fourth cycle of the program. Some students also shared their research experience within the program.

The event included 18 presentations and thirty-three scientific posters from different disciplines. The meeting was also accompanied by scientific competitions to enhance the spirit of scientific competition among undergraduate students participating in the program, and to present their outputs and research achievements within the program, and to honor the distinguished ones. The event included an exhibition accompanied by scientific posters and a special exhibition hall to introduce the program.

In addition to accompanying workshops in both Arabic and English, and launching a number of initiatives such as the Assistant Researcher Program for undergraduate students.

The program brochure was issued and distributed in Arabic and English, the research handbook for the program (1440H / 2018), and the second scientific meeting brochure for students of the Undergraduate Research Support Program were issued and distributed. Also the supervising committee on the program, the arbitration committee, the students, the representatives of the Deanship, the students and the trainees were honored. 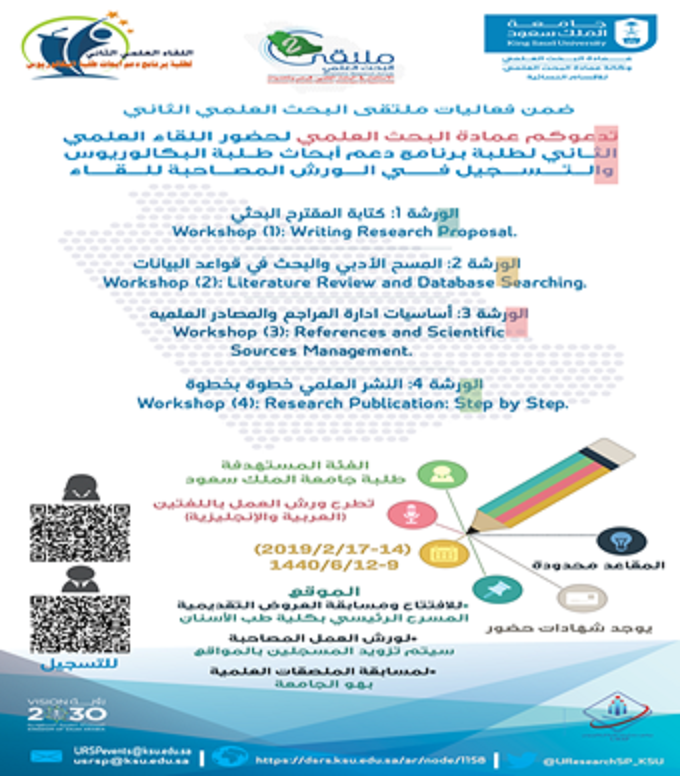